Adaptive social protection in the context of natural and climate-related risks: Concept note 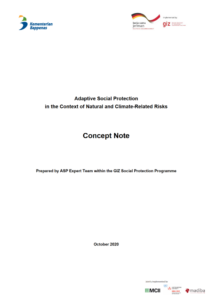 With over half its territory in the Pacific Ocean’s Ring of Fire and 127 active volcanoes, in addition to extreme weather events exacerbated by climate change, Indonesia is one of the world’s most disaster-prone countries. Over the past 30 years, natural hazards have triggered an average of 289 significant disasters annually in the country. In addition to fatalities, injuries and destruction of property, such disasters push many people into long-term poverty, often due to counterproductive coping strategies such as selling productive assets or reducing investment in health and education. Indonesia’s government is likewise often forced to divert finance for longer-term development into short-term disaster response measures. To tackle the risks caused by natural and climate-related hazards and their consequences, the government has adopted a series of strategies and plans, that are not yet sufficiently coordinated.

The approach: A roadmap towards resilience, based on the Adaptive Social Protection building blocks

This paper supports the government’s adoption of Adaptive Social Protection (ASP) as an integrated, comprehensive approach that embraces key elements of Social Protection, Disaster Risk Management and Climate Change Adaptation and builds on their interfaces. The rationale behind the ASP concept is to help individuals, households and communities living in areas exposed to disasters to adapt their lives and livelihoods to these conditions (adaptive capacity), to manage potential risks (ex-ante anticipatory capacity), and to cope with their negative impacts (ex-post absorptive capacity) to strengthen their resilience to deal with the adverse impacts of disasters and other shocks.

Taking into account existing government and partner-supported programmes, an integrated roadmap for resilience in Indonesia is proposed based on the four ASP ‘building blocks’: