This publication describes Mongolia’s attempts to expand and strengthen its social health insurance system with technical assistance from Germany. 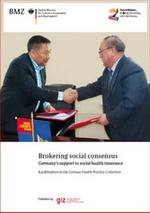 Situation.
Although poor quality of services and rising out-of-pocket payments raised concerns amongst politicians and the public in the mid-2000s, badly needed reforms of Mongolia’s social health insurance were delayed due to lack of consensus between key government ministries, social partners (unions and employers), and due to operational problems within the understaffed  Social Insurance General Office (SIGO).

Approach.
The German-supported project ‘Reform of the social health insurance’ strengthened the dialogue among the stakeholders and improved the system’s operations and governance. Longstanding power imbalances and tensions between stakeholders were redressed and technical capacity was built in areas such as contracting, claims processing and quality control.

Results.
The project’s brokering of consensus resulted in Mongolia’s first long term strategic plan for social health insurance. Relations between SIGO, the key ministries, and the social partners have improved dramatically. Operationally, staffing levels doubled, and new procedures are being rolled out across the country following a one-year pilot programme.

Lessons learned.
The brokering of consensus through a carefully planned, evidence-based process, accompanied by managerial capacity building, can make the crucial difference when it comes to moving reforms forward.

In the mid-2000s, both politicians and the public were increasingly critical of Mongolia’s social health insurance, notably regarding the low quality of services covered and rising levels of out-of-pocket payments. A major problem was the fragmentation of responsibilities between the Social Insurance General Office (SIGO), the Ministry of Health, the Ministry of Social Welfare and Labour, the Ministry of Finance, and the National Social Insurance Council. As well, employers and trade unions felt they had little influence on policy, despite the fact that their members’ contributions accounted for the majority of the social health insurance fund.

In 2008, Germany agreed to fund a three-member independent Expert Group to assist with the reform. The Expert Group successfully moved the social health insurance agenda forward, and in late 2010 a set of draft amendments to the Citizens Health Insurance Law was submitted to Mongolian Parliament. For a number of reasons, these were not fully supported by the cabinet, resulting in legislative stalemate. Meanwhile, other urgent problems remained unaddressed.

At the request of the Mongolian government, Germany agreed in early 2011 to fund a project entitled ‘Reform of the social health insurance’ to try to make further progress. The project had four priority areas:

An early task was to assess organisational bottlenecks in the system, using the ‘Capacity WORKS’ methodology developed by GIZ. It found that SIGO’s Health Insurance Department was ineffective as a purchaser of health care and lacked the ability to monitor health care quality on behalf of the insured. Staffing levels had not changed since 2000, despite activities having more than quadrupled, a situation that affected productivity, quality of work, and the reputation of the organisation.

Increased organisational capacity. In line with the project’s recommendations, the number of Health Insurance Department staff almost doubled by early 2013. Anticipating this increase and the many new procedures introduced by the reform project, a range of training packages were rolled out beginning in 2012. As well, a Mid Term Strategy was created to provide a business plan for the HID over next four years.

Improving quality of services. The project supported the design of a continuous quality improvement programme with the assistance of international experts, including one of Germany’s largest health insurance funds. It included detailed contracts between SIGO and health care providers; new claims submissions and control processes; patient satisfaction surveys; a peer review process to resolve conflicts. A one-year pilot programme in four hospitals in Ulaanbaatar increased efficiency in the claims process, improved error identification in claims, and improved the adversarial relationship between health insurance inspectors and hospitals. In 2013, the contracts were renewed in the pilot hospitals, and the new approaches will be rolled out across the country starting in 2014.

Breaking the stalemate through social dialogue. The most visible reflection of the project’s successful brokering of consensus was the development of a Long Term Strategic Policy for Mongolia’s social health insurance. Facilitated by GIZ experts under the umbrella of the P4H Network (a global network of which Germany is a member), the process brought together all stakeholder organisations over the course of 2012/2013. The resulting Strategy explicitly aligns the Mongolian social health insurance system with the WHO’s concept of Universal Health Coverage. Mongolia’s cabinet approved it on 13 April 2013.

Legislative reform. New proposals to amend the Citizen’s Health Insurance Law are currently being discussed in Parliament. Among other reforms, the amendments refocus the Law on fulfilling the needs of beneficiaries and increasing the operational independence of the health insurance organisation as a health care service purchasing organisation.

Choosing the correct ‘entry points.’ In 2008-2010, creating the Expert Group helped both to inform and to gain consensus from all stakeholders. In 2011-2013, improving the Health Insurance Division’s performance brought it significant support from government, health care institutions, and social partners.

Learning by doing. Carrying out capacity building in a participatory way allowed lessons learned in pilots and early phases to be accepted and even eagerly anticipated as reforms were rolled out country-wide.

Addressing power issues. Significant bottlenecks were reduced by resolving longstanding tensions over institutional ‘turf’ between the Ministry of Health and the Ministry of Population Development and Social Protection, and by increasing the social partners’ ability to influence policy.

Figures from the publication 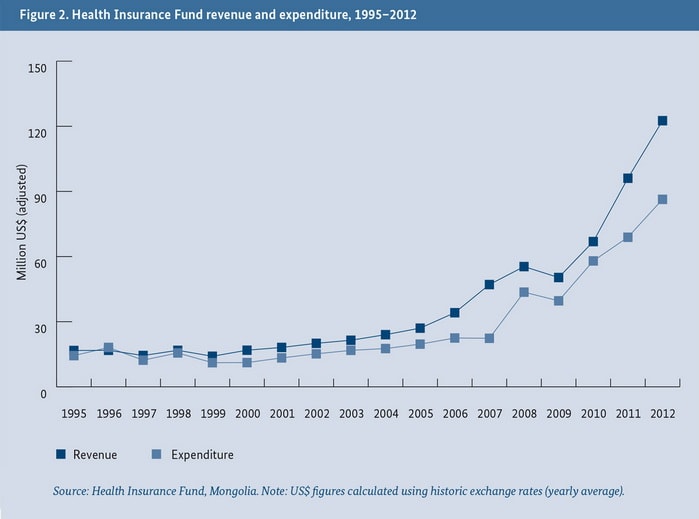 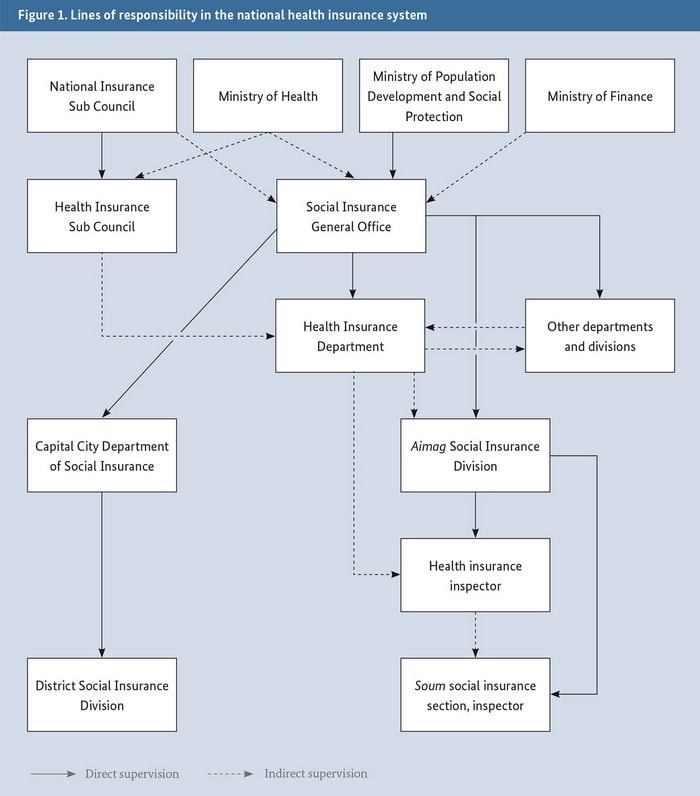