Roughly 2 billion people, especially children and women, suffer from deficiencies in micronutrients, i.e. vitamins and minerals essential for growth, reproduction and good health. Germany has played a significant role in the international response to malnutrition, including working through multi-stakeholder partnerships for supplementation, food fortification, or dietary diversification (the three basic strategies in the response). An example is the Strategic Alliance for the Fortification of Oil and Other Staple Foods (SAFO). 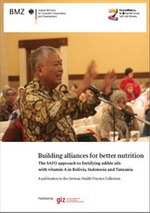 Situation. Vitamin A deficiency is a common form of malnutrition in the global South. While fortification of foodstuffs with vitamin A is acknowledged as an effective strategy, progress in extending coverage has stalled in many countries.

Approach. Initiated in 2008 under the Germany’s develoPPP.de programme, SAFO is an alliance between GIZ and chemical company BASF which focuses on adding vitamin A to edible oils. Rather than finance or operate food fortification, it works as a catalyst to reinforce government regulation and strengthen the business environment in which food is produced. This involves: (1) policy advice and advocacy; (2) economic and technical implementation; (3) testing arrangements, particularly for monitoring systems;
(4) legally mandatory fortification.

Results. SAFO has contributed to increasing the availability of vitamin A-fortified foods to an estimated 145 million-plus people. The additional cost of producing fortified oil has not resulted in a significant price rise to consumers. In the three focus countries, Bolivia, Indonesia and Tanzania, companies producing the majority of edible oil are now fortifying some or all of their products with vitamin A.

Lessons learned. SAFO’ experience confirms that the business and regulatory environment for food fortification is an “ecosystem”. Attention to all parts of the ecosystem, and timely intervention when one or another part of the system is blocked, is at the heart of SAFO’s success. 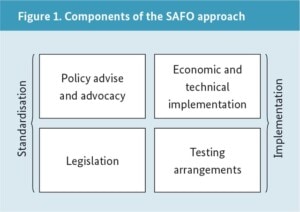 Initiated in 2008 under Germany’s develoPPP.de programme, SAFO is an alliance between GIZ and the chemical company BASF which focuses on reducing vitamin A deficiency by adding vitamin A to staple foods, mainly edible oils. Scheduled for an initial three years, SAFO was extended until 2012, and worked concentrated on three countries: Bolivia, Indonesia and Tanzania.

Rather than finance or operate food fortification activities, SAFO works as a catalyst, providing targeted assistance to kick-start or reinforce existing programmes and to strengthen the ‘business ecosystems’ that produce and deliver food. The SAFO approach emphasises four components in national food fortification efforts:

Much of SAFO’s work in Bolivia has focused on building up monitoring systems for industry itself and public food inspectors. Key partners include National Council of Food and Nutrition, the Ministry of Health and Sports, and the edible oil industry. An agreement was reached with the Ministry’s Nutrition Unit to bolster monitoring activities and reinforce the country’s network of food testing laboratories. Inter-institutional cooperation agreements were signed with leading manufacturers of cooking oil, major municipal laboratories, universities, and the Bolivian Institute of Standardization and Quality.

Training workshops were held in 2009 and 2010, at which representatives of stakeholders outlined areas of cooperation and joint action, and received training in the use of the test kits supplied by BASF. In 2010, additional financial support became available from major donors to help the country’s Zero Malnutrition Programme, which included food fortification. To support this, SAFO provided:

A SAFO-consultant coordinated food fortification activities in the country and helped to improve working relationships between different levels of government.

At time of writing, there has been progress towards consistent monitoring and enforcement of standards across the country, including a common testing methodology and reporting procedure implemented in all nine Departments (provinces). There is now good cooperation among the various micronutrient laboratories across Bolivia. 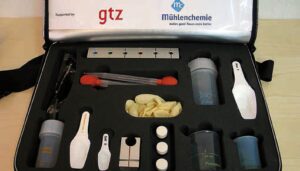 While Indonesia has been successful in reducing rates of malnutrition among children under the age of five, vitamin A deficiency is estimated to affect approximately one in five Indonesian children of pre-school age. The country is one of the world’s largest producers of edible oils, and unbranded palm oil is widely consumed in much of the country. In 2009, the Indonesian government announced a five-year strategy with the goal of reaching more than 200 million Indonesians with fortified cooking oil.

SAFO’s main partner in Indonesia is the Indonesian Nutrition Foundation for Food Fortification (KFI), a non-profit foundation established in 2002. After SAFO activities began in the country in 2009, BASF concentrated on providing oil producers with technical knowledge, supporting business plan development, and helping to set up quality assurance regimes. Meanwhile GIZ proceeded along several paths, notably in boosting the technical capacity of KFI and supporting its work on an ambitious proposal to Global Alliance for Improved Nutrition (GAIN) for the funding of a country-wide edible oil fortification programme.

This led to the Ministry of Health and GAIN’s joint announcement in January 2011 of a $US 6 million multi-sector partnership aiming to reach over 80 percent of Indonesians with vitamin A-fortified vegetable oil. GIZ also provided assistance to the Indonesian government in preparing a mandatory fortification standard and, working with the German firm BioAnalyt, entered into a formal partnership with the Indonesian authorities to help establish a functioning monitoring and evaluation system.

By the end of the SAFO initiative, four major edible oil companies had begun to fortify their oil with vitamin A, and local government monitoring capacity has been reinforced through workshops in several provinces.

Although Tanzania has made progress in many health indicators over recent decades, malnutrition remains a serious problem. One third of women and under-five children are estimated to be deficient in vitamin A. The national government has developed a National Nutrition Strategy for 2009-2015 and a variety of international development partners have supported Tanzania’s efforts. A National Food Fortification Alliance (NFFA) was established in 2003.

In 2008, SAFO conducted a fact-finding mission, identified potential stakeholders and highlighted a number of barriers to progress including: lack of a label to ‘brand’ eligible fortified products, insufficient political commitment, and stalled efforts to create a monitoring system. In 2009, a series of workshops, meetings and forums began. While other stakeholders focused on building technical capacity within government units and helping to draft standards and monitoring regulations, SAFO concentrated on:

In August 2011, the government issued regulations for mandatory fortification of edible oil. SAFO partners further completed guidelines and manuals for food producers and for the regulatory body, the Tanzania Food & Drug Authority (TFDA). SAFO partners also helped draft a National Action Plan for the Enrichment of Staple Food, making it possible for the country to utilise new donor funding, and ensure that progress continues to be made.

The evidence strongly suggests that in the absence of SAFO, national food fortification efforts would have had significantly less impactand implementation might not have taken place at all or would have been delayed. Achievements of SAFO include:

Partly based on the SAFO experience, the recently announced German Food Partnership (an international public-private initiative) has committed to nutrition-related activities in Indonesia and the Philippines, in coordination with GAIN. As well, GIZ has begun a new project called Affordable Nutritious Foods for Women (ANF4W) which is co-funded by the BMZ and the Bill & Melinda Gates Foundation, and includes BASF as one implementation partner.