Fifteen years of the Join-In Circuit on AIDS, Love and Sexuality

This case study is about the Join-In Circuit (JIC) on AIDS, Love and Sexuality, a behaviour change communication tool which has been used with support from Germany’s Federal Ministry for Economic Cooperation and Development (BMZ) to promote HIV prevention and improve sexual and reproductive health, particularly among young people, in countries worldwide. This publication presents experiences from four countries – Kyrgyzstan, Nepal, Zambia and Zimbabwe – where the JIC has been implemented widely in recent years. 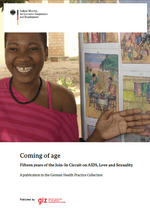 Situation. Approximately one-third of adults newly infected with HIV worldwide are between the ages of 15 and 24. Many young people do not have accurate and comprehensive knowledge of HIV or access to effective interventions which can prevent and treat HIV.

Approach. The Join-In Circuit (JIC) on AIDS, Love and Sexuality is an interactive behaviour change communication tool which stimulates discussion and personal reflection about HIV and sexual and reproductive health. It is used with diverse audiences to educate and to promote protective behaviour.

Results. More than 200,000 people, most of them young people, have participated in the JIC since 2011. The JIC increases knowledge about HIV and sexual and reproductive health. When implemented as part of a package, it provides opportunities for participants to access services such as HIV testing and counselling.

Lessons learned. Where possible the JIC should be implemented in combination with interventions which seek to reform health systems and to transform community-level attitudes towards young people and their sexual and reproductive health needs.

Despite a 35% decline in new HIV infections globally since 2000, an estimated two million people were newly infected with HIV in 2014. Thirty-four per cent of newly-infected adults are young people between the ages of 15 and 24; the majority of these are young women and girls. Over the past 15 years the percentage of young people with accurate and comprehensive knowledge about HIV has increased, but levels of knowledge remain too low. While many effective interventions are now available to prevent and treat HIV, young people do not always have easy access to them.

The Join-In Circuit is a behaviour change communication tool which engages large groups of people in interpersonal communication on HIV and sexual and reproductive health. Originally developed in Germany by the Federal Centre for Health Education (BZgA), the JIC has been used in health, education and HIV prevention programmes implemented by the Deutsche Gesellschaft für Internationale Zusammenarbeit (GIZ) in selected low- and middle-income countries in Africa, Asia, Europe and Latin America since 2001.

The JIC is premised on the idea of education through dialogue. Groups of 10 to 15 participants rotate through a series of stations, each of which focuses on a particular topic (e.g. modes of HIV transmission, contraception, positive living). Trained facilitators use interactive problem-solving, games, and visual material to stimulate discussion and personal reflection in a safe, open and relaxed atmosphere. Afterwards, they provide participants with information about HIV and health services available in the area. In some settings, condoms are distributed and mobile services, such as HIV testing and counselling, are available on site.

Since 2001 GIZ has supported the adaptation and use of the Join-In Circuit in more than 20 countries. It has worked with governmental and non-governmental partners to customise the content of the JIC so that it reflects social and cultural norms, to train cohorts of JIC facilitators, and to implement the JIC with diverse target groups. Young people are a core audience in most countries, but the JIC has also been used with soldiers, factory workers, farm workers, sex workers, truck drivers, prisoners and other groups of adults.

Over the past five years, the content of the JIC has been revised in several countries to better reflect the connections between HIV and other aspects of sexual and reproductive health and rights, such as family planning, antenatal and neonatal care, and gender-based violence. The JIC has been used to mobilise demand for services, such as HIV testing and counselling and medical male circumcision, and integrated with national HIV and sexual and reproductive health strategies and programmes.

Since 2011 more than 200,000 people in ten countries have participated in the Join-In Circuit, the great majority of them young people between the ages of 15 and 24.

In Zimbabwe, more than 31,000 young people in two provinces have taken part in the JIC, which has been implemented as a package alongside mobile HIV testing and counselling and referrals to health facilities with youth-friendly corners. Important results include:

In Kyrgyzstan, where the JIC is endorsed in the Den Sooluk National Health Reform Programme as a recommended HIV prevention measure, more than 20,000 young people, predominantly in rural areas, have participated in the JIC at 650 schools since 2011. A process is underway to institutionalise the JIC in the Kyrgyz school system through the life skills curricula and teacher training institutions.

Known as SangSangai, the JIC in Nepal has reached 36,000 young people aged 15 to 19 in two regions of the country since 2013, generating strong increases in comprehensive knowledge about HIV among participants. SangSangai has been redesigned with German support to cover a wide range of adolescent sexual and reproductive health topics beyond HIV and sexually transmitted infections.

Since 2011 60,000 people in Zambia have taken part in the JIC, which is coordinated by Afya Mzuri, a local NGO. While many of the participants are young people, the JIC has been used widely with adults in workplace programmes and community settings. GIZ is currently working with the Ministry of Education to introduce the JIC into schools.

Key learnings over the past five years include:

The JIC should be implemented in combination with interventions which strengthen health systems and address community attitudes. There are limits to what a one-time intervention like the JIC can achieve in terms of individual behaviour change. In many settings structural and socio-cultural factors strongly influence young people’s willingness to access health services and to practice safe sexual behaviours.