A civil society organisation based in Johannesburg, loveLife runs a Contact Centre offering psycho-social counselling by phone and internet. This report focuses on Germany’s support for measures to ensure counselling of best possible quality to as many people as possible. The ultimate aim is to prevent HIV and promote sexual and reproductive health and general well-being among South Africa’s adolescents and young adults. 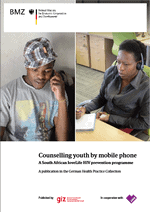 Situation.  While annual incidence of new HIV infection among South African youth (15-24) has declined significantly since 2002, it is still far too high: 2.1% among young females and 1.0% among young males.

Approach.  Since 2011, Germany has been supporting loveLife’s holistic approach to HIV prevention. One German focus has been on assuring the quality and extending the reach of the psycho-social counselling offered by loveLife’s Contact Centre via phone and internet.

Results.  A German-supported study found that a large majority of callers were satisfied with the Contact Centre’s counselling services and felt it helped them understand their problems and empowered them to act. However, some callers pointed to areas needing improvement and their input helped on-going efforts to assure counselling of good quality and, also, resulted in introduction of a new text-chat option.

Lessons learned. Mobile communications technology makes it ever more feasible to provide psycho-social counselling by phone to everyone. It is a low-cost intervention that can make significant contributions to HIV prevention, sexual and reproductive health if it is scaled up, promoted and sustained so it is widely available and people are aware of its availability year after year.

South Africa is among the countries most affected by the HIV epidemic and its young women are especially vulnerable. From 1990 to 1999, the estimated number of South Africans living with HIV grew from 49 thousand to 3.7 million and HIV prevalence grew from 0.2% to 12.6%. Since then, the prevalence has levelled off at a high level (12.6% in 2012).

High prevalence of HIV among South Africa’s young people is best understood in the context of the many other challenges the majority of them face and these include poverty, economic and gender inequality, lack of education and job opportunities, and lack of access to youth-friendly health services.

Launched by a civil society/government partnership in 1999, loveLife set out to prevent HIV among all South African youth by focussing most of its attention on in-school and out-of-school adolescents 12-17 years old living in the country’s informal settlements and rural areas. Its approach has always been holistic, based on the understanding that you can only change adolescents’ risk-taking attitudes and behaviour if you give them the hope and self-confidence.

loveLife delivers a wide range of programmes through its country-wide networks of 860 hubs, 470 youth-friendly health clinics and 22 youth centres. It supports these programmes mainly with two types of peer educator. Specifically, each year it recruits, trains and deploys more than a thousand recent high-school graduates it calls groundBREAKERS. To extend the reach of its groundBREAKERS, it recruits and deploys many more young people it calls mpintshis (Zulu for buddies).

The Contact Centre is a key component of loveLife’s holistic approach. Its Youth and Parent lines allow people of all ages to access information, referrals and psycho-social counselling provided by nine qualified counsellors, five operators and ten groundBREAKERS. Its ‘Plz Cal Me’ function allows those on mobile phones to request call-backs and avoid phone charges. And its Mizz B serves as a fictional agony aunt who writes a newspaper column and invites communication by regular mail, email or text-chat.

Germany’s approach to supporting the Contact Centre has been to assign it a quality assurance advisor. Since 2011, this advisor has been initiating and/or supporting development of a range of measures to ensure psycho-social counselling of best possible quality and to extend the offer of such counselling to more people by making good use of mobile communications technology. A key measure was a quality assessment and improvement study in 2012/ 2013 which included analysis of the centre’s routine monitoring data plus a survey in which 420 callers participated.

A 2011 study found that youth who participate in loveLife’s programmes are significantly more likely than other youth to have knowledge, attitudes and behaviour that reduce their risk of HIV infection. The 2012/2013 German-supported quality assessment and improvement study found that the Contact Centre was making its intended contributions to loveLife’s holistic approach to HIV prevention among all youth, especially those living in informal settlements and rural areas.

The study found that a large majority of callers were under 25 (80%), were calling from mobile phones (73%) and lived in informal settlements and rural areas (71%). Many asked only for information or referrals but more than 40% asked for counselling. Reasons they asked for counselling covered the full range of issues loveLife generally covers (e.g., HIV, unintended pregnancy, poor parent-child relations). A large majority were very satisfied (66%), satisfied (15%) or somewhat satisfied (13.5%) with their counselling experience and rated it highly for helping them understand their problems and empowering them to act. Almost all said they would call again if they needed help with another problem and would also recommend the service to others.

The study also identified needs to improve the friendliness, patience and non-judgmental listening skills of some counsellors, operators and groundBREAKERS. This informed the German advisor’s on-going efforts to initiate and/or support development of tools and measures which now include, for example: