Getting a better grasp on Togo’s future

Population dynamics at the heart of development planning

This case study traces how the Government of Togo, with support from German Development Cooperation, embarked on a process of improving planning in all sectors by integrating population dynamics. A striking feature of this case is the Togolese government’s strong appropriation and continuing pursuit of the approach, including after the end of German support. 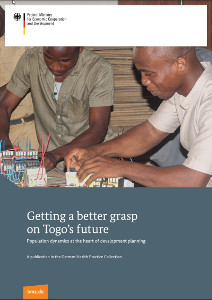 Attaining the demographic dividend is a powerful motivator for integrating population dynamics into planning. With decreasing fertility, many developing countries hope for a ‘demographic dividend’, where effective integration of the next generation into the national economy could increase gross domestic product by up to 40%. Harnessing this future potential, however, requires planning to take full account of population dynamics – projected changes in population size, composition and geographical distribution.

An assessment of existing demographic data and its use is an effective way to bring home the importance of population dynamics for planning. Sharing the situation analysis of the existing quality, collection and utilisation of demographic data with key stakeholders convinced these decision-makers to give priority to population dynamics to improve planning in their country.

Planning ministries are well-placed partners for German and other development agencies for the adequate consideration of population dynamics in planning cycles across sectors and levels of government. Togo’s Ministry of Development Planning, rather than any one sector ministry, turned out to be the most effective champion to broadly disseminate and enforce the integration of population dynamics in its own decentralised structures as well as in the planning exercises of the different sector ministries under its supervision.

Togo is looking to the future with a new Five-Year Plan and a ‘2030 Vision’ based on the United Nations’ Sustainable Development Goals (SDG). With a lowered fertility rate, the population under age 15 decreased from 46% to 42% between 1996 and 2015. This indicates a potential for the rising generation, if gainfully employed and with fewer dependents to care for, to contribute to a demographic dividend – ‘a virtuous cycle in which socio-economic progress and demographic change maintain each other’. Currently faced with high un-and underemployment, migration and urbanisation, Togo aims to get a better grip on collecting and exploiting socio-demographic data in order to plan more effectively for the future.

The cross-cutting initiative ‘Population Dynamics in National Sector Planning’ was active from March 2015 to March 2016. Supported by a local team consisting of an expatriate team leader and a Togolese demographer, this small-scale initiative aimed to complement three Togolese-German development programmes intervening in the medium-sized cities of Kpalimé, Sokodé and Tsévié. The initiative’s goal was formulated as follows: ‘Togo’s national sector planning and programmes are better oriented toward mid-and long-term demographic developments.’

The population dynamics approach fitted in with the ongoing priorities of the country’s Ministry of Development Planning, which, in cooperation with GIZ, had developed a series of planning guidelines, now being applied on regional and local levels.

The Ministry, through its newly created Directorate of Population Studies, rapidly took the lead in piloting the new initiative, extending its reach to a broad array of key stakeholders. The initiative provided support in three domains:

A major challenge encountered was the inadequacy of existing socio-demographic data, as revealed by the initial assessment – a problem which the country is tackling, including through reform of its system of Civil Registration and Vital Statistics. The comparatively short duration of German support motivated the Ministry from the start to fully appropriate the initiative, pursuing the population dynamics approach in developing its national Five-Year and 2030 Vision plans, but also extending the approach to other ministries.

This small-scale measure produced a remarkably high number of valuable outputs in a very short time. It involved a great number of partners and sectors and became known nationwide and even outside Togo’s borders.

Tailor-made tools are put to use: The detailed initial assessment of collection and use of demographic data in Togo created awareness of the gaps that needed to be filled and pointed to appropriate training for planners, which the initiative provided. The ‘Guide for integrating population dynamics in national planning’, which the initiative produced, has been widely disseminated and is used both for training and planning, including budgetary allocation.

Population Dynamics is now at the heart of the Ministry of Development Planning: With support from the initiative, the Directorate of Population Studies developed Togo’s first prospective demographic studies and has become a strong actor within the Ministry, establishing a permanent oversight structure to ensure that population dynamics is integrated into all future planning in the country.

Planning on regional and local levels is improving with population dynamics input: The Guide is used in the regions of bilateral cooperation for developing the municipalities’ annual investment plans and will also be applied in preparing the upcoming local development plans.

Several sector ministries are taking population dynamics into account: Through the Directorate, the Ministry of Development Planning obtained UNFPA funding to train eight sector ministries on use of the Guide and has instructed them to apply it systematically in all planning activities, a process it is supervising through its new oversight structure. Togo’s new agricultural policy document has been strongly influenced by the Population Dynamics Guide.