Meeting the challenge with information technology

This publication describes how the Government of India has extended protection against catastrophic health expenditures to poor and informal workers through Rashtriya Swasthya Bima Yojana (RSBY), a national health insurance scheme whose design and implementation is supported by Germany’s Federal Ministry for Economic Cooperation and Development (BMZ). 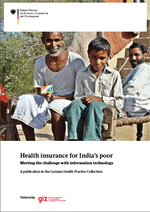 Situation. Informal workers constitute 94 per cent of India’s workforce; the vast majority are not adequately protected in the event of illness. Some 2 per cent of Indian households are impoverished each year as a result of catastrophic health expenditure.

Approach. The national health insurance scheme RSBY provides hospitalisation coverage for up to five members of households living below the poverty line, up to an annual ceiling of Rs 30,000 (EUR 400). Through the use of biometric Smart Card technology, coverage under the scheme is paperless, cashless, and available to beneficiaries at empanelled public and private hospitals across India.

Results. More than 36 million households are enrolled in RSBY and 9.8 million hospitalisations have been covered since the scheme’s launch. After four years of implementation, the average hospitalisation rate in RSBY districts has risen from 1.86 per cent to 3.04 per cent. Lessons learned. A government-led insurance scheme designed and implemented in close partnership with private sector and civil society actors and utilising cutting-edge information technology can be successful in extending social protection to millions of poor citizens, even in a country as large and diverse as India.

This publication describes how the Government of India has extended protection against catastrophic health expenditures to poor and informal workers through Rashtriya Swasthya Bima Yojana (RSBY), a national health insurance scheme whose design and implementation is supported by Germany’s Federal Ministry for Economic Cooperation and Development (BMZ).

Government spending on health in India is one of the lowest in the world. The public health system is unable to adequately meet the population’s health needs, and private providers account for a huge proportion of health services. Both public and private providers are poorly regulated and of uneven quality. Private expenditure represents 70 per cent of total expenditure on health; of this, 86 per cent are out-of-pocket payments made directly by patients.

Informal workers constitute 94 per cent of the Indian workforce; the vast majority are not protected in the event of illness. Ill health is a leading cause of indebtedness among the poor.

Since 2008, the Deutsche Gesellschaft für Internationale Zusammenarbeit (GIZ), on behalf of BMZ, has been supporting India’s Ministry of Labour and Employment (MoLE) on the design and roll-out of RSBY.

RSBY is structured as a public-private partnership. It is led by the central government, but implemented by authorities in India’s states and union territories in cooperation with public and private insurance companies, hospitals and civil society organisations.

RSBY provides hospitalisation coverage up to 30,000 Rupees (EUR 400) per year for up to five members of households living below the poverty line. There are no age limits and pre-existing conditions are covered. Premiums are subsidised by the central and state governments. Insurance companies are selected by state authorities to implement RSBY. They enrol households directly in villages and issue beneficiaries with a biometric Smart Card which can be used to access cashless treatment at any public or private hospital across India which is empanelled with the scheme.

RSBY makes extensive use of information technology. The Smart Cards issued to beneficiaries contain their photographs and fingerprints; this allows their identity and eligibility to be verified at hospitals when they seek treatment, thereby reducing the likelihood of fraud. Empanelled hospitals send RSBY transaction data to central servers on a daily basis; insurance companies receive and settle claims online, directly with hospitals.

Starting in 2011, RSBY eligibility has been extended to new categories of informal workers, including street vendors, domestic workers, rag-pickers, taxi and autorickshaw drivers, and mine workers. Certain states have topped up RSBY’s standard benefits package with additional coverage for tertiary care; pilot programmes have extended the RSBY model to include outpatient care and have tested the suitability of RSBY’s Smart Card platform for administering other social benefits, such as life and disability insurance and food subsidies.

Since 2011, under the Indo-German Social Security Programme, GIZ has worked closely with the MoLE to refine  RSBY’s design and expand its coverage, upgrade its IT systems, build institutional capacity in state-level implementation agencies, extend its Smart Card technology as a platform for other social security schemes, and develop monitoring tools to evaluate the scheme’s outcomes.

The following are some of RSBY’s main achievements:

RSBY demonstrates that a government-led social security scheme, designed in close partnership with public and private sector actors, can be successful in extending protection against catastrophic health expenditure in a country as large as India. Its success lies in part in the decision to tailor the scheme to the needs of its target audience (i.e. making it cashless, paperless and portable). RSBY provides access to public and private hospitals, thus significantly enlarging the network of healthcare providers for the poor and empowering them with greater choice. A focus on strong IT systems has helped to combat fraud, enabled the swift settlement of claims, and allowed close monitoring of the scheme’s performance.

In April 2015, the responsibility for RSBY was transferred to the Ministry of Health & Family Welfare (MoHFW). The essential features of the scheme as of now remain unchanged. GIZ will continue to support its implementation. Learnings from RSBY will help India’s government to develop an effective model to achieve its goal of universal health coverage. Areas which may require further attention include: