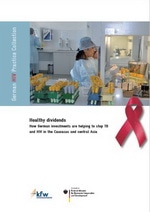 Few regions of the world are as threatened by TB and HIV, diseases that thrive in the presence of the other, as eastern Europe (including the Caucasus) and central Asia. Here TB prevalence is up to 50 times higher than in western Europe, and multi-drug-resistant TB prevalence rates are among the highest in the world. Add to this widespread injecting drug use (a major mode of HIV transmission), high rates of incarceration, poor prison conditions and severe poverty and it is clear why many countries in these regions fear that they may be on the cusp of explosive dual epidemics of TB/HIV.

This report summarizes the promising approach used by German Development Cooperation (GDC), regional ministries of health and other partners in seven countries in the southern Caucasus and central Asia to address this public health threat. The report focuses on GDC’s programme in two of these countries: Georgia and Uzbekistan. German efforts to address TB here go back more than one decade and have helped both countries become leaders in this critical area of endeavour, with strengthened national TB control programmes.