A publication in the German Health Practice Collection 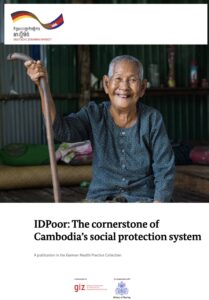 Since its establishment in 2007, IDPoor has evolved into the cornerstone of social protection in Cambodia, helping to ensure that a growing array of benefits reach the households and individuals who need them most. Germany’s Federal Ministry for Economic Cooperation and Development (BMZ) has supported its partners at the Ministry of Planning for more than 15 years as they have incrementally developed IDPoor from its original rounds-based approach into a fully digitised, on-demand poverty identification system.

The following key learnings emerged in the course of this cooperation:

Cambodia joined the ranks of lower middle-income countries in 2015, yet nearly one in five Cambodians still live in poverty and many more live just above the poverty line. By some estimates, three-fifths of Cambodians are at risk of impoverishment in the face of economic shocks, natural disasters or health emergencies. In response to these risks and to ensure shared prosperity, the Government of Cambodia is working to provide comprehensive social protection to all Cambodians. To deliver on this commitment, it requires a systematic way to identify poor and vulnerable households and to target social assistance to them in times of need. Periodic household-based poverty identification assessments cannot capture dynamic changes in people’s economic circumstances, however. Nor are they flexible enough to respond quickly in the face of unexpected shocks, such as the COVID-19 pandemic.

Beginning in 2005, the Cambodian Ministry of Planning, with support from Germany through the Deutsche Gesellschaft für Internationale Zusammenarbeit (GIZ), developed IDPoor as
a single basis for targeting programmes for the poor. IDPoor initially used a hybrid model to combine the objectivity of a proxy means test survey with the accuracy and affordability of a community-based selection process. Households identified as poor received Equity Cards which entitled them to a range of benefits, from access to free health services to school scholarships. Poverty identification was carried out in recurring rounds, with all 24 of Cambodia’s provinces covered over a three-year period.

In 2011 IDPoor was formally adopted by the Government of Cambodia as its official poverty identification mechanism.

All organisations targeting poor households, be they government, non-government, local or international, were required to use IDPoor data to identify beneficiaries. In 2016 IDPoor was extended to urban areas and the system attained national coverage.

While the three-year cycle was impressive compared to poverty surveys in other countries, households that missed the IDPoor round in their village had to wait until the next cycle
to be evaluated for eligibility. With one in four Cambodians migrating for work, and with many households cycling in and out of poverty, IDPoor needed a more flexible way to allow for assessments between rounds. In 2017 the Ministry of Planning piloted a new ‘on-demand’ mechanism, including digital data collection, in selected communes, and subsequently announced its intention to gradually roll out the new, more flexible procedures over a three-year period, starting in 2020.

The COVID-19 pandemic, which inflicted massive economic harm on Cambodia, accelerated these plans. In cooperation with Cambodia’s 1,646 commune/sangkat councils, the Ministry of Planning used the new IDPoor procedures to update lists of poor and vulnerable households through a countrywide campaign. Identified households could register for cash transfers through a social assistance programme funded by the Government of Cambodia and administered by the Ministry of Social Affairs, Veterans and Youth Rehabilitation. New digital solutions linked the cash transfer delivery system with the IDPoor database of households holding Equity Cards.

Convinced by the speed, efficiency and power of the flexible new procedures, the Government of Cambodia decided in August 2020 that, henceforth, IDPoor would employ a fully on-demand approach. Since that time the Ministry of Planning has been working to strengthen the internal systems which will underpin these new procedures. This includes e.g. continuous data updates from commune/sangkat councils and real-time information about Equity Card holders; a suggestions and complaints mechanism to enhance transparency; and a continuous approach to monitoring and evaluation aimed at reducing inclusion and exclusion errors.