Support to PLWH organisations in Cameroon 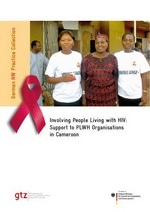 In Sub-Saharan Africa, more than 25 million people are infected with the HI-Virus. Persons living with HIV (PLWH) are often powerful catalysts in the fight against the epidemic, supporting those who are also affected and assisting others in remaining HIV-negative. In many sub-Saharan African countries, denial, fear, and stigmatization have for a long time undermined the involvement of PLWH. Often, their needs and their capacities are not sufficiently recognized by policy-makers.The importance of “Greater Involvement of PLWH” (GIPA) was acknowledged at international level at the Paris AIDS Summit in 1994. Inspired by this initiative, the GIZ-supported health programme in Cameroon, a country severely affected by the HIV epidemic, has focused on empowering PLWH by ensuring their involvement in the national response to AIDS at all levels.