Mainstreaming HIV and AIDS in the Vocational Training Sector in Botswana 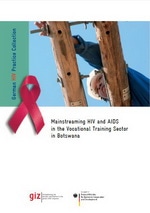 The vocational training (VT) Sector has an important role to play in HIV/AIDS prevention and in impact mitigation.The young adults this sector works with not only represent the human capital that their country’s future economic growth depends upon, but also the age group most at risk of HIV/AIDS infection.The approach described in this report has the objective of mainstreaming HIV/AIDS in the VT system in Botswana, in order to help prevent further infections among teachers and learners.

In the course of this project, and with technical support provided by former Deutsche Gesellschaft für Technische Zusammenarbeit (GTZ) and former German Development Service (DED), the Botswana Training Authority (BOTA) HIV/AIDS Division has developed a number of promising practices, including the mainstreaming of HIV/AIDS in the organisational structure of BOTA and the accreditation process for Vocational Training institutions, the development of unit standards and guidelines for curriculum development, as well as VT-specific approaches to promote behaviour change.