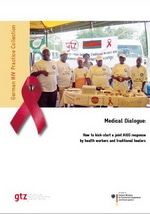 The Medical Dialogue is a stepwise approach to bridging the gap between scientific thinking and cultural traditions, setting the stage for more effective prevention and treatment campaigns. Malawi is one of the countries hardest-hit by the AIDS epidemic. Nonetheless, the cooperation between the national health system and traditional practitioners that WHO recommends has not been realized to date. The Medical Dialogue approach described in this report shows how such a cooperation between traditional and the biomedical health care practitioners can be launched and established in a sustainable manner.

The method’s application began with training local moderators. They facilitated a series of focus group discussions in which traditional healers and biomedical practitioners talked about local sexual practices, beliefs and taboos and their ideas about illness, prevention, diagnosis and treatment. Both sides were encouraged to share their doubts and concerns about each other in ways in which both felt that their points of view were respected. The focus group discussions provided information on which to base three-day medical dialogue workshops. Participants included equal numbers of traditional healers and biomedical practitioners chosen for their knowledge and communication skills and in order to create a mix of genders, ages and fields of work within traditional medicine and biomedicine. On the first day, traditional healers and biomedical practitioners met separately to prepare themselves. On the second day, they met together to air and discuss their different ideas and opinions. On the third day, they worked together on producing a mutually agreed plan of action that divided responsibilities between the two groups.