Learnings from building a national programme

This case study explores learnings generated during the establishment of Nepal’s national opioid substitution therapy (OST) programme, a process which has been led by the government of Nepal and Nepalese civil society organisations with support from German Development Cooperation and other international development partners. 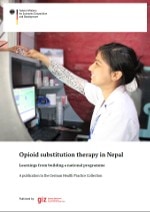 It is possible to build a national OST programme in a setting where the legal, technical and financial prerequisites are weak or absent. International models need to be adapted at governance, programme, and service delivery levels in order to establish a tailor-made policy framework, financing arrangements and quality clinical and social services.

When there is not a clear political commitment to harm reduction, expanding OST is likely to be slow and inefficient. OST should ideally be launched with an agreed plan for national scale-up, moving from the establishment of model sites to the gradual extension of standardised services. A robust M&E system is crucial to generate local evidence of effectiveness.

Introducing OST as part of a national HIV strategy can help to get the service started, but does not guarantee its longer-term sustainability. When launched as an HIV prevention intervention, there is a risk that OST becomes dependent on HIV-related funding and administered as a vertical programme. Instead it should be embedded in a broader public health- and human rights-oriented drug policy committed to comprehensive health care for people who use drugs.

Ex-drug users have a central role to play not only in advocating for treatment and rehabilitation services, but in actually delivering them. The direct involvement of ex-users in the provision of psychosocial support in OST programmes can help to close an enormous service gap in settings where few social workers are available.

The estimated 52,000 people in Nepal who inject drugs face a range of health problems, including an elevated risk of blood-borne infections: nationally 6.3% of people who inject drugs are HIV-positive and between 22% and 47%, depending on the region, are infected with hepatitis C. People who are dependent on drugs struggle to access comprehensive health and psychosocial care. The government plays a limited role in the provision of treatment and rehabilitation services. Privately-run programmes are of variable quality, are unaffordable for many, and generally favour abstinence-based approaches which are associated with high relapse rates. Although Nepal was the first country in Asia to allow harm reduction interventions for people who inject drugs, it has not fully embraced a public health approach to drug use.

Since 2009, through a series of technical cooperation projects on harm reduction implemented on behalf of Germany’s Federal Ministry for Economic Cooperation and Development (BMZ), the Deutsche Gesellschaft für Internationale Zusammenarbeit (GIZ) has worked with national and international partners to expand the availability of OST in Nepal. Starting from an existing pilot project authorised by the Ministry of Home Affairs, and informed by Germany’s own experience with OST, advisors with the harm reduction projects have systematically built up six pillars of a sustainable national OST programme.

In order to strengthen the policy framework and to position OST as a public health intervention, the project advocated for the Ministry of Home Affairs to share responsibility for OST with the Ministry of Health and to allow the service to be administered at public hospitals and by non-governmental organisations (NGOs). Key policy documents – e.g. management guidelines, clinical guidelines and standard operating procedures for the provision of psychosocial support services – were developed and approved. The project helped to secure stable financing for a scaled-up OST programme from the Global Fund to Fight AIDS, Tuberculosis and Malaria, which has been covering the costs of medical and psychosocial support services for OST patients in Nepal since 2011.

At the same time, the project improved the clinical provision of substitution therapy by training a cohort of OST doctors and nurses according to a standard curriculum, providing continuous on-the-job coaching, and working with the German company CompWare Medical to set up fully automated methadone dispensing machines with integrated patient documentation systems at each OST site. In the absence of qualified social workers, the project trained ex-drug users working for NGOs to provide psychosocial support services to OST patients. A training curriculum and standard operating procedures to guide the work of Social Support Units were developed through a participatory process. Training curricula for both medical and social support staff emphasise OST as one part of comprehensive care for people who inject drugs. OST patients are referred for additional services as needed, including screening for HIV, tuberculosis and hepatitis.

To strengthen systems for monitoring and evaluating OST, the project supported the establishment of patient recordkeeping systems at OST sites and built the organisational capacity of two local institutions to take over the training and supervision of Medical and Social Support Units following the end of German support for harm reduction in mid-2016.