This publication describes how AIMAS, a local organisation supported by German Development Cooperation (GDC), has persevered during and after Côte d’Ivoire’s 10-year civil war (2002-2011) in providing women and families greater choice and control over their lives through social marketing of contraceptives and condoms. 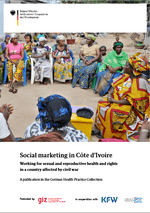 Situation. Côte d’Ivoire is recovering from a civil war which largely destroyed the health system. With on average five children per woman and only 14% use of modern contraception, 27% of women have an unmet need for family planning, which the public and private health services are not able to satisfy.

Results. AIMAS has contributed significantly to raising family planning prevalence (from 4% to 14%) and knowledge (from 73% to 93% among women), providing two-thirds of the condoms and oral contraceptives used in Côte d’Ivoire.

Lessons learned. Impact and sustainability of a social marketing programme can be enhanced by investing in a dedicated local agency rather than a time-bound ‘project approach’. A combination of mass media and community-level communication is effective in promoting behaviour change.

An estimated 225 million women in developing countries have an unmet need for family planning, (i.e. they want to avoid pregnancy but do not use modern contraception), resulting in tens of millions of unintended pregnancies. In addition to fuelling unsustainable population growth, hundreds of thousands of these pregnancies end tragically in abortions or maternal deaths.

The health and development challenges associated with a lack of access to reproductive health services are particularly evident in Côte d’Ivoire, West Africa’s former economic powerhouse now struggling in the aftermath of the civil war. The population has increased in the last 40 years from 7 million to its current 23 million and continues to grow at 2.6% per year. Côte d’Ivoire was one of the first countries in West Africa to develop a generalised HIV epidemic; even today AIDS remains the number one cause of death in adults.

Low use of modern contraception (14%) is reflected in high rates of fertility – an average of five children per woman – and of maternal mortality, while two out of five Ivorian mothers report having had an abortion. A major constraint is the disarray of the Ivorian health system, which was largely destroyed during the civil war. Only 40% of public health facilities presently offer family planning services, and only 26% of the population lives within five kilometres of such a facility. Cultural factors, including men’s traditional role as family decision-makers, also hamper women’s free access to contraception.

In 1995 KfW, with funding from the German Federal Ministry for Economic Cooperation and Development (BMZ), took over financial support for Côte d’Ivoire’s social marketing programme. Product social marketing uses commercial marketing techniques to encourage socially desirable behaviour change by promoting the uptake of certain products, in this case condoms and other contraceptives.

When it was launched in 1991, the Ivorian social marketing programme had focused on promoting the use of condoms for HIV prevention, but with KfW’s support family planning became an increasingly important part of the mission, and other contraceptives were added to reflect the needs of different groups. Today the programme also offers pills and hormonal injections through health facilities and pharmacies, and is about to launch a long-acting intrauterine device.

The second change that came with KfW support relates to the organisational set-up of the social marketing programme. The American non-profit organisation Population Services International (PSI) with local NGO Ecoforme Développement (ECODEV) had implemented highly successful communication and condom marketing strategies and was initially maintained as the executing agency. But KfW encouraged development of the existing project team to form the nucleus of an autonomous, specialised Ivorian agency. The Agence Ivoirienne de Marketing Social (AIMAS) was created in December 2001. AIMAS has developed into an efficient and resilient organisation, which was able to increase provision even during the country’s period of instability, and now ensures country-wide coverage with contraceptives, complementing the limited services provided by the health system still recovering from the war.

The well-organised distribution system for AIMAS’s products involves various channels from pharmacies to street vendors, with training and follow-up of medical and pharmaceutical personnel. It is complemented by promotion strategies via both mass media (such as TV soap operas) and local NGOs subcontracted for face-to-face communication in densely populated areas. A close and complementary relationship with the Ivorian Ministry of Health as well as a strong research and Monitoring and Evaluation (M&E) department have also been crucial in targeting interventions to changing needs.

Today, AIMAS is recognized as a leader – in Côte d’Ivoire and in West Africa – in fields such as logistics, training, Behaviour Change Communication and television and video production and it has made considerable progress in promoting rights-based and gender-sensitive use of contraceptives:

Factors contributing to AIMAS’s success include: