How a SWAp has sustained Kyrgyz health reforms 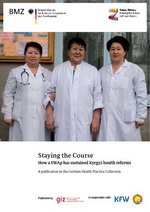 In the mid-1990s, the government of the Kyrgyz Republic, in close cooperation with the World Health Organization, embarked upon a series of fundamental reforms to the way health care is structured, financed and delivered in the former Soviet republic.

Since 2006, the Federal Republic of Germany has been supporting this reform process, through the provision of both financial and technical cooperation, under the auspices of a sector-wide approach (SWAp) in the health sector. In a review of six health SWAps around the world by the World Bank’s Independent Evaluation Group (IEP) in 2009, the Kyrgyz SWAp attracted international attention for receiving high marks for achieving capacity and efficiency gains from the SWAp approach itself, as well as for realising key health program objectives. It put into motion an intensive learning process which has seen the Kyrgyz Ministry of Health build significant capacity in areas such as policy development, planning, budgeting, financial management, and procurement. In taking on ever-increasing responsibility for managing the SWAp budget in a transparent and accountable way, the Ministry of Health has demonstrated to other ministries and public sector institutions the value of integrating internationally accepted public financial management standards into routine operations.

One of the most important lessons of the SWAp exercise in Kyrgyzstan is the potential role of financial cooperation in strengthening the institutional capacity of public sector institutions and in contributing to improved governance in the country as a whole.