The German Approach to HIV Mainstreaming

Effective development work in a time of HIV 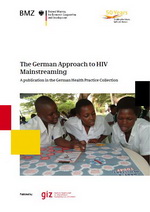 Over the past quarter century as the devastating impacts of the global HIV epidemic have become apparent, many different strategies have been pursued to respond to the disease, particularly in sub-Saharan Africa where HIV prevalence rates are highest.  This publication is concerned with one of these strategies – HIV mainstreaming – which can be employed by organizations whose ongoing development work is affected by the consequences of a severe HIV epidemic. In February 2001, Germany’s Federal Ministry for Economic Cooperation and Development set HIV mainstreaming as policy for all of German Development Cooperation’s implementing organizations. Since then, Germany’s technical and financial cooperation agencies have supported ‘internal mainstreaming’ – by establishing HIV workplace programmes for their employees and their families in lan International Cooperation (GIZ) and the German Development Bank (KfW).