The Tangled Lives of Philip Wetu

A Namibian story about life choices and HIV

This publication tells the story of Three and a Half Lives of Philip Wetu, a multi-platform behaviour change communication (BCC) product developed in Namibia by the Deutsche Gesellschaft für Internationale Zusammenarbeit GmbH on behalf of the Federal Ministry for Economic Cooperation and Development. 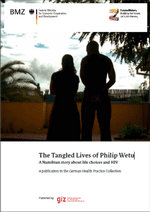 Situation. Namibia’s generalised HIV epidemic is partly driven by widespread multiple and concurrent sexual relationships and intergenerational sex. Despite high levels of HIV awareness, many Namibians do not perceive themselves to be at risk of infection.

Approach. GIZ worked with local organisations to produce Three and a Half Lives of Philip Wetu, an interactive film which engages audiences in discussion of life choices which put one at risk of HIV. The film has been shown in facilitated screenings throughout southern Africa and was subsequently adapted into a comic strip with social media tie-ins.

Results. More than 20,000 people have seen Three and a Half Lives of Philip Wetu. The film generates positive changes in audiences’ HIV-related knowledge, attitudes and intended behaviours, demonstrating the potential of locally-developed behaviour change communication tools for HIV prevention.

Lessons learned. The film is more likely to achieve its desired effects among audiences who can identify with the characters. Support for the development of behaviour change communication instruments should also encompass the design of a realistic plan for their sustainable use following the end of external assistance.

An estimated 13% of Namibians aged 15 to 49 are infected with HIV. Forty percent of new infections occur among young people, the majority among women. Multiple and concurrent sexual partnerships (MCP) and intergenerational sex are among the key drivers of the epidemic. Despite widespread awareness of HIV, levels of HIV testing are low in Namibia. After two decades of prevention campaigns and a rising ‘AIDS fatigue,’ the challenge is to find creative ways to help people perceive their actual risk and to adopt their behaviours accordingly.

In 2009 the Multisectoral HIV and AIDS Response Programme collaborated with Namibian partner organisations to produce Three and a Half Lives of Philip Wetu, a 30-minute interactive film about a middle-class Namibian man who has sexual relationships with several women simultaneously. Screened to groups of 20-30 participants by a trained facilitator, the film follows a decision-tree format in which the audience helps the main character, Philip Wetu, make important decisions with implications for his own health and well-being, as well as those of people close to him. These include decisions such as whether to get tested for HIV, whether to have unprotected sex, and whether to disclose his HIV status to his partners. At three decision points the film is stopped, the audience discusses what Philip should do, and the film then continues according to the audience’s decision.

In discussing the situations which Philip faces, participants are encouraged to reflect upon the choices they make in their own relationships. The film aims at increasing knowledge of risks of HIV transmission, changing attitudes towards risky practices such as MCP, and, ultimately, reducing behaviours which fuel the spread of the virus.

Since its launch, Three and a Half Lives of Philip Wetu has been screened in workplaces, schools, universities, military facilities and community centres across Namibia. The film was broadcast on television as part of a national campaign to reduce MCP and has been distributed to community groups across southern Africa.

Philip’s story was subsequently adapted into a 13-episode comic strip for young people and published in the newspaper The Namibian. Readers were encouraged to send feedback on Philip’s dilemmas by SMS and to join into discussions about love, relationships and life choices on a Facebook page. The comic strip along with an educational guide for life skills teachers is being distributed to schools countrywide.

Two independent peer reviewers have confirmed that the Philip Wetu approach is state of the art, has produced valuable results and provides important lessons for the response to HIV. Key results include:

Reach. More than 20,000 people in Namibia and neighbouring countries have seen the film through facilitated sessions or on television. Over the last five years, more than 350 people from different partner organisations have been trained to facilitate screenings of the film. The comic strip has reached several thousand young people, while hundreds more have engaged with Philip’s story via social media.

Improvements in knowledge, attitudes and intended behaviours. Following the film, statistically significant improvements in HIV-related knowledge were recorded in relation to questions about the ‘window period’ for re-testing, the risks of acute infection and the possibility to prevent infection after possible exposure to HIV. In some regions the film also generated positive shifts in participants’ attitudes to people living with HIV and led to significant improvements in intentions to test for HIV. Viewers report that the film helps them to personalise what they already know about HIV through its depiction of characters and situations which they encounter in their everyday lives. The film is particularly effective with urban audiences; results are generally stronger among males than females and among adults than young people.

Three and a Half Lives of Philip Wetu was intended as a stand-alone tool for workplace programmes, but over time has grown into a multi-platform BCC intervention. Key to its success was the decision to invest in good quality, locally-made products which reflect familiar situations and typically Namibian ways of speaking and thinking. Collaborative relationships with local organisations were also important at all stages.

Monitoring data and focus group discussions show that the interactive film is enjoyed by many different audiences, but that it is most effective among participants who can identify with the characters and who have a good grasp of English. High-quality facilitation is another important condition for success. When these conditions are not met, there is a risk that audiences can interpret the film’s key messages in unintended ways.

Another important lesson relates to the need to develop a sustainable implementation plan for BCC products. Although Three and a Half Lives of Philip Wetu has been widely praised, its continued use has largely depended upon German financial support. To make the tool independent from external finances, one promising approach is to identify ‘champions’ within private sector companies and government institutions who can ensure the products’ regular use in workplace programmes which reach large numbers of employees.

Watch the interactive movie in full

The format of the film – an interactive drama that allows viewers to influence the story – provides great opportunity for personalised discussion. It is not ‘they’ who are at risk, who have the problems, but it is actually ‘us’, the people around us, our friends, the men and women we admire for their lifestyles.

In the interactive approach, the audience has the chance to decide what will happen in the next scene. At three specific points in the story, the film is paused so that the audience can discuss what has happened so far, and decide what Philip should do next. In addition, by directing the choices the character makes, viewers are given the opportunity to ‘try out’ decisions they may have to make in their own lives. This process replicates the often tough life choices that young people have to make.

Watch the first part of the movie and the decide below how you want the story to develop.

Tell Philip what he should do…

Scene B1: Philip agrees to go for an HIV test.

Scene B2: Philip refuses to go for an HIV test.