Learning from support to large-scale reforms in India and Indonesia 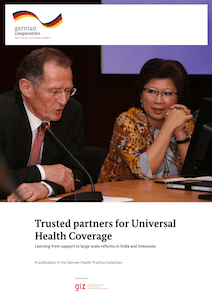 This comparative review of GDC’s experience in India and Indonesia yields four broad lessons for how German technical cooperation can position itself and what type of support it can deliver to advance social health protection in partner countries:

The pursuit of Universal Health Coverage (UHC) is primarily a political, rather than a technical undertaking. German Development Cooperation (GDC) support to UHC reforms in India and Indonesia has been most effective when the advisors had a deep understanding of the dynamics of the local context and purposefully engaged in the political-administrative reform process with a solution-focused, adaptive, and politically informed approach.

Working through well-connected and respected national staff with deep subject-matter expertise yields results. Indian and Indonesian advisors and team leaders have been central to the effectiveness of GDC’s support. They have facilitated change processes and helped to translate and link GDC’s international expertise and experiences to local reform processes. Even where inputs from international advisors proved to be critically important, they took care to maintain a low profile and ensured that GDC’s work was seen as part of and supportive of the agenda driven by the respective country.

The effectiveness of GDC’s support was built on long-term in-country commitment, flexibility, responsiveness to partners’ needs, and trust. GDC advisors were respected as ‘neutral brokers’ who were committed to their partner’s UHC agenda. GDC staff were granted insights into many of the core decision-making processes and were allowed to provide technical support to shape both countries’ health schemes in pursuit of UHC because the partners trusted them. Short-duration projects and narrowly defined results frameworks could undermine the defining characteristics of what made GDC support to large-scale UHC reforms effective in India and Indonesia: taking a long-term, impact-focused approach and committing to genuinely partner-led processes with flexibility over time and resources.

While GDC’s work with individual ‘champions’ has significantly helped to advance UHC efforts in each country, strengthening institutional capacities has proven to be critical to ensure sustainability of the progress towards UHC. When leading figures transition out of their UHC roles or their political fortunes change, institutional mechanisms must be in place to maintain the reform momentum and manage the social health protection schemes.

The challenge: the complexity of pursuing Universal Health Coverage

Health is a human right. Yet nearly half the world’s population currently does not have full coverage of essential health services and about 100 million people are pushed into extreme poverty (having to live on US$1.90 or less a day) each year due to healthcare expenditures. In 2005, India and Indonesia, along with other World Health Organization (WHO) member states, subscribed to the goal of Universal Health Coverage (UHC): ensuring that all people have access to healthcare without suffering financial hardship paying for it.

Attaining UHC is a highly complex and lengthy undertaking that raises numerous systemic – and redistributive – questions about how a state intends to fulfil a basic human right of its citizens. Therefore, supporting UHC reforms as a development partner is not merely a technical but also a political task.

German Development Cooperation (GDC) has accompanied India’s and Indonesia’s efforts to reach UHC since the beginning of their endeavours in this direction. This case study retraces key moments, successes and challenges experienced by the GDC teams supporting the two countries’ UHC reforms and seeks to generate insights into how technical cooperation can position itself and what it can deliver to effectively support large-scale, long-term social health protection reforms in partner countries.

In India, the government introduced Rashtriya Swasthya Bima Yojana (RSBY) in 2008 to provide publicly funded health protection to poor and informal workers and their families. At its peak, the scheme was operational in 25 out of 36 Indian states and union territories and covered 41 million households, or about 135 million individuals. After some political and administrative changes, a more comprehensive national health scheme was launched in September 2018 as part of the Ayushman Bharat (‘Long Live India’) initiative: Pradhan Mantri Jan Arogya Yojana (PM-JAY) provides coverage for inpatient care to over 500 million poor and vulnerable beneficiaries. As of December 2019, 110 million individuals had already been verified as eligible and have been issued a card confirming their entitlement to receive benefits under PM-JAY. The second component of Ayushman Bharat reflects the government’s plan to provide comprehensive primary care, with the planned establishment of 150,000 ‘Health and Wellness Centres’ across India.

In Indonesia, the fragmentation of the country’s health and social protection system – catering only to selected groups, such as civil servants and the military – left large parts of the population exposed to the devastating effects of the 1997 Asian financial crisis. It took over 10 years and a delicate political process to arrive at a new social security law that mandated universal coverage for all, the establishment of a National Social Security Council, the transformation of some of Indonesia’s most powerful parastatal companies and service providers into public trusts and finally the 2014 launch of Jaminan Kesehatan Nasional (JKN), the national social health insurance scheme that aims to cover all 270 million Indonesians. By March 2020, JKN has insured 223 million people, or 83% of the universal coverage target.

In both countries, German-supported advisors stayed engaged for over 10 years and provided flexible technical assistance, as legal frameworks needed to be developed and administrative procedures drafted. Vast amounts of data had to be analysed and management structures set up that could ensure the functionality and operational viability of the new schemes to serve over half a billion users.

By acting as ‘neutral brokers’, GDC has enabled processes and platforms that brought divergent interests together to establish common ground, and helped its partners find viable, durable solutions to regulatory and operational UHC challenges.

GDC advisors helped their partners find viable solutions to regulatory and operational challenges by committing themselves to partner-led processes – often of unknown duration and uncertain outcome – which they helped to advance as ‘honest brokers without a hidden agenda’. While always maintaining their impartiality, they clearly positioned themselves as proponents of the ultimate goal of attaining UHC.

Strengthening partners’ institutional capacities has enabled them to take social health protection to scale. In some instances, GDC advisors became integral parts of India’s and Indonesia’s UHC management and implementation arrangements, in India so much so that they filled key roles in supporting the government to operate the scheme while dedicated institutional capacity was not yet available. GDC then worked closely with the Indian government in setting up the National Health Authority as the responsible body to manage PM-JAY. In Indonesia, dedicated efforts to strengthen institutional capacities were successful for certain actors, empowering the National Social Security Council during a critical phase of the UHC reform process.