What they really want to know

Developing booklets for young people on growing up, sexuality and HIV 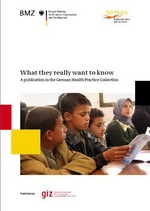 This report presents a stepwise approach to developing sex education material together with young people to ensure that it meets their informational needs. The concept was first developed in Tanzania and has in recent years been adapted in various other contexts in Africa and Asia.

The approach is new in so far as it follows in a rigorous and systematic manner a number of consecutive steps, involving young people and youth experts throughout the production process. This systematic approach lends itself to replication and adaptation in different socio-cultural settings. The outcome of the process is a set of question-answer-style booklets. So far this approach has been replicated or adapted in 17 countries in Africa and Asia. Reactions and evaluation results have shown high appreciation and further demand by young people, educators and parents alike. Lessons learnt are that it is essential and rewarding to involve young people throughout in the production of education material for them, that the material should take a broader perspective of young people’s concerns related to reproductive health and sexuality instead of an HIV perspective only; that particularly in the beginning a lead role by government structures is not necessarily appropriate and helpful, as they tend to avoid controversial issues such as youths’ sexuality. Instead, creating alliances, with non-government and international organisations often contributes to making the process viable.