On a fast track to Universal Health Coverage in Pakistan

By covering in-patient costs for the poor and vulnerable, the Sehat Sahulat Program enables their access to quality care and spares them catastrophic health expenditures. This article retraces important steps in Pakistan’s progress towards providing health for all. As a trusted partner, Germany has been accompanying Pakistan’s journey towards UHC for over 20 years.

In Lahore, Pakistan’s bustling metropolis, Waheed Anwar smiles broadly as he receives his health card at a Beneficiary Enrolment Centre set up in Mian Mir Hospital. A day labourer as container loader, Mr Anwar is relieved that he and his family will now have access to quality healthcare that he could not otherwise afford.  The Sehat Insaf (‘health justice’) card entitles families identified as poor to cost-free in-patient treatment for up to 720,000 Pakistani rupees (about 4600 USD) per family per year. Such card distribution centres have multiplied in recent months, on both Federal and provincial level, as the country’s Sehat Sahulat (‘health convenience’) Program (SSP) expands coverage to new districts and to additional vulnerable groups, such as people living with disabilities and members of the transgender community.

Entirely government-funded, this social health protection initiative has grown since 2015 to cover a total of 6.5 million families, and by February 2020 was already implemented in 118 out of Pakistan’s 156 districts. By the end of 2020 the Program aims to cover all districts of Punjab and Khyber Pakhtunkhwa provinces and of the Federally administered regions and reach around 14 million families.

In line with the government’s overarching Ehsaas (‘compassion’) programme, SSP aims to tackle the inequities of Pakistan’s healthcare system. The country’s National Health Vision 2016-25 decries quality so poor in the public sector that barely 20% of the population use the first-line facilities, and a private sector characterised by high prices and lack of regulation. Out-of-pocket payments represent 56% of total health costs, and 70% of the economic shocks experienced by poor households are the result of catastrophic health expenditures.

For countries committed to realising Universal Health Coverage, political will may be more important than prosperity. Many of today’s wealthy nations launched the process when they were in financially and socially challenging times. Their political courage has paid off.

How it all began…

Bilateral Pakistani-German cooperation has been active for over two decades. In 2012, Pakistan’s foremost social protection programme, the Benazir Income Support Programme (BISP), which provides stipends to families identified as poor, introduced a micro health insurance scheme for its beneficiaries. In Punjab, the Waseela-e-Sehat (‘source of health’) initiative, with technical support from Germany’s Federal Ministry of Economic Cooperation and Development (BMZ) through the Deutsche Gesellschaft für Internationale Zusammenarbeit (GIZ) GmbH, was piloted in the Faisalabad district, enrolling over 75,000 families between 2012 and 2014. A similar model entitled ‘Social Health Protection Initiative (SHPI)/Sehat Sahulat Program’ was developed in four districts of Khyber Pakhtunkhwa starting in 2015 with financial support from KfW Development Bank and technical support from GIZ.

Aware of these experiences on provincial level, and with advisory support from the bilateral programme, in January 2015 Pakistan’s Federal Government launched its own Prime Minister’s National Health Programme (PMNHP) in the Federally administered regions. The PMNHP was then rapidly adopted by three of Pakistan’s four provinces, while Khyber Pakhtunkhwa independently pursued the expansion of its SHPI/Sehat Sahulat Program. In January 2019, the new government changed the name of the PMNHP to Sehat Sahulat Program, administered by the Ministry of National Health Services, Regulations and Coordination, and accelerated the pace of expansion.

How does the Sehat Sahulat Program work?

Each Pakistani citizen has a National Identity Card number stored by the National Database and Registration Authority (NADRA). Beneficiaries of the Sehat Sahulat Program are identified on the basis of a poverty survey conducted by BISP in 2011, which used a proxy means test (PMT) to evaluate each family’s poverty level: eligibility for benefits depends on the family’s PMT score. The Sehat Insaf card gives access to cash-free in-patient services in public and private hospitals that have been ‘empanelled’ in the Sehat Sahulat Program.

Developing a social health protection scheme is anything but simple. It implies managing information on demography and disease burden, ensuring access to health services, alignment with national and provincial health policies, and analysis of fiscal, political and legal constraints. An important aspect is the definition of criteria for the benefits package and for the selection of beneficiaries as well as the potential extension (of benefits and of beneficiaries). Managing the scheme must take into consideration the interplay and exchange of data between stakeholders (government, insurance companies, health providers) while keeping in mind the issues of health financing, portability of benefits from one province to another, and cross-subsidisation of the programme for risk pooling among beneficiary groups of different means.

As the provinces and Federally administered regions moved rapidly in order to realise the shared goal of universal health coverage (UHC), there was not always enough time to critically assess what had already been done before advancing to the next step. Khyber Pakhtunkhwa launched its pilot in 2015, targeting the poorest 21% in the four districts – however, less than a year later, before the pilot was complete and evaluated, the provincial government decided to invest its own budget to expand coverage to all 26 districts and to the poorest 50% of their entire population.

A Costing Study reveals the need for standardising treatment packages

To have a basis for its negotiations with hospitals on prices per treatment, in 2017 the government of Khyber Pakhtunkhwa, with support from GIZ, carried out a Costing Study in the four District Headquarter Hospitals of the SHPI target districts. The aim was to calculate the average costs of specific services, and their composition, so that the prices the insurance provider paid would be realistic and standardised across hospitals. However, data collection and analysis were challenging due to the still largely paper-based record-keeping – and because the average costs and treatments diverged widely between hospitals.

In attempting to provide a baseline for evaluating the cost structure, the study underlined the need for improving data management, including digitalisation at hospital level, and brought home the importance of continuously monitoring costs to the participating health managers.

In November 2017 Khyber Pakhtunkhwa’s government saw the need to take stock before it continued to expand the Sehat Sahulat Program. With GIZ support, and led by an expert in International Health Economics, it organised a joint reflection on a potential Roadmap to UHC for the province. A round-table discussion brought home to participants the complexity of the issues involved. The Technical Advisor of the GIZ Support to Social Protection – Social Health Protection (SP-SHP) project at the time recalls that ‘The roadmap exercise gave our partners the opportunity to see that for protection to work, THEY had to make all these different components work together – and that various departments had to collaborate, e.g. department of planning, public health, engineering, media, religious parties.’

With support by an expert from Germany’s AOK International Consulting (KomPart), the provincial government then initiated a Joint Progress Review on implementation to date, taking a critical look at processes such as enrolment of beneficiaries, empanelment of hospitals, identification of benefits and the scheme’s financial sustainability. For a social health protection system to become financially viable, a usual development is to add paying members (and to make enrolment obligatory). Khyber Pakhtunkhwa for a time considered the obligatory enrolment of the province’s 400,000 civil servants and their families in order to strengthen the scheme’s financial sustainability. This was not pursued, however. The current orientation in Khyber Pakhtunkhwa is rather to expand coverage to the entire population with the government assuming the premium costs for all citizens. One argument for this approach is that it avoids exclusion and inclusion errors, which are due, in part, to outdated figures from the BISP 2011 poverty survey (which is currently being updated).

At the end of 2018, the first phase of the Federal Sehat Sahulat Program was coming to an end. It was time for the Ministry to tender out the new three-year contract with the insurance provider. An important issue was to determine the proper amount for the yearly premium that the government would pay per family, which had been set at 1300 PKR (about 8.35 USD) in the first phase.

To help government set realistic premium rates, in December 2018 GIZ commissioned experts from the International Labour Organization (ILO) to conduct an Actuarial Analysis. After systematically considering different variables (‘actuarial factors’) related to the beneficiaries and the care provided, the actuarial analysis concluded that to ensure viability of the Sehat Sahulat Program in its expansion over the next three years, the premium per family would need to be increased by about 37%. The managers of the Program applied the recommendations from the actuarial analysis when tendering their new insurance package at the end of 2018.

The actuarial analysis – the first to be commissioned by a German-supported bilateral social protection project – was broadly disseminated and discussed with stakeholders in Pakistan at a scientific session of the 9th Annual Public Health Conference of Islamabad’s Health Services Academy. It was then made available to a worldwide audience through a well-attended webinar organised by socialprotection.org. 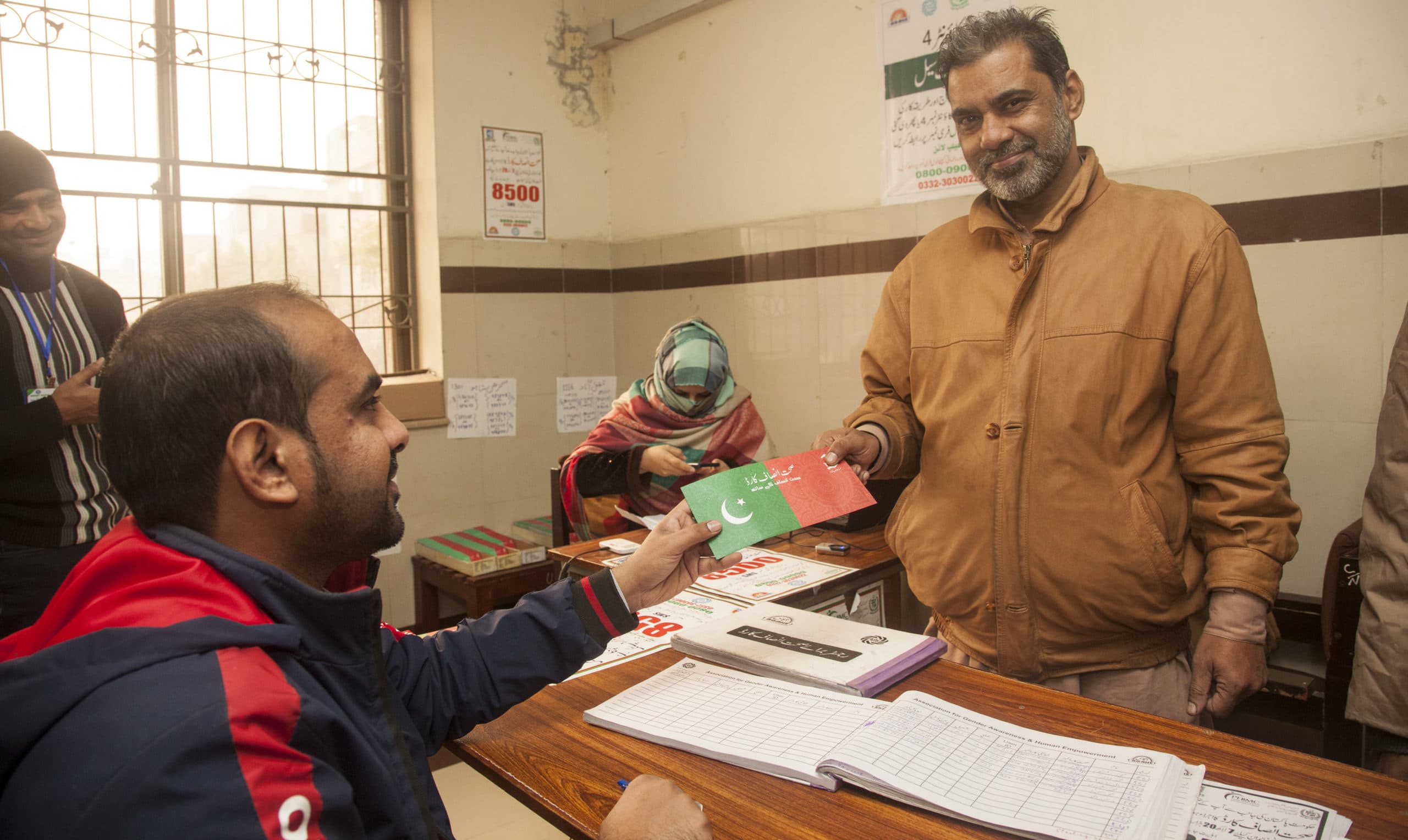 In expanding Social Health Protection, Pakistan has made great strides towards UHC

According to the Sehat Sehulat Program websites, to date 432,390 beneficiaries nationwide have accessed in-patient treatment with their Sehat Insaf card. Statistics from the SSP Central Management Information System analysis supported by Pakistani-German bilateral cooperation indicate that more women than men have utilised the services (mainly in relation to delivery).

A bonus appreciated by certain health managers is that the empanelment of both public and private hospitals and their monitoring by the insurance company build in quality controls and motivation, since poorly performing hospitals will be excluded from the lucrative SSP contract (a private hospital in Islamabad reports that SSP reimbursements constitute 40% of its revenue). According to Dr Faisal Rifaq, CEO of the Federal Sehat Sahulat Program, patients themselves are perceiving an improvement in quality, as measured by the decreasing number of complaints registered in the Program’s database.

What makes the difference is political will

In aiming for UHC, Pakistan has opted to give priority to the poor. This is strongly in line with the government’s commitment to make Pakistan a ‘welfare state’. In his recent address to the World Health Summit in Berlin, WHO Director Dr Tedros Adhanom Ghebreyesus reminded his audience that today’s wealthy nations did not wait until they were prosperous to embark on the road to UHC but launched the process when they were in economically difficult circumstances. He pointed out that ‘One of the scarcest commodities in global health today…is political will.’ In Pakistan, this commodity is in good supply. The political will to pursue UHC appears stronger than the financial constraints the country is currently facing.