From cyberspace to villages – innovative solutions to help tackle pandemics

What happens when doctors, engineers and entrepreneurs put their heads – and laptops – together to tackle one of West Africa’s biggest health challenges?  In Liberia, Nigeria, Sierra Leone and Guinea, BMZ-supported hackathons are generating fresh ideas and digital solutions for keeping people informed during major disease outbreaks – even in the most remote areas.

In 2014 when his native Liberia was riven by the Ebola outbreak, Theophilus Nyemah, a student volunteering with health teams to inform people about Ebola prevention, was left baffled by how much time and manpower was needed to reach those at risk.“It was hard work,” he said. “We needed about 400 people to cover just one community,” he said, describing going door to door, village to village, explaining, distributing leaflets and answering questions.

Though the outbreak was eventually declared over in 2016, Nyemah was left thinking that there must be a better way to keep people informed during such emergencies. In 2019, he decided to tackle the issue from a completely different angle: by joining a GIZ-run hackathon. 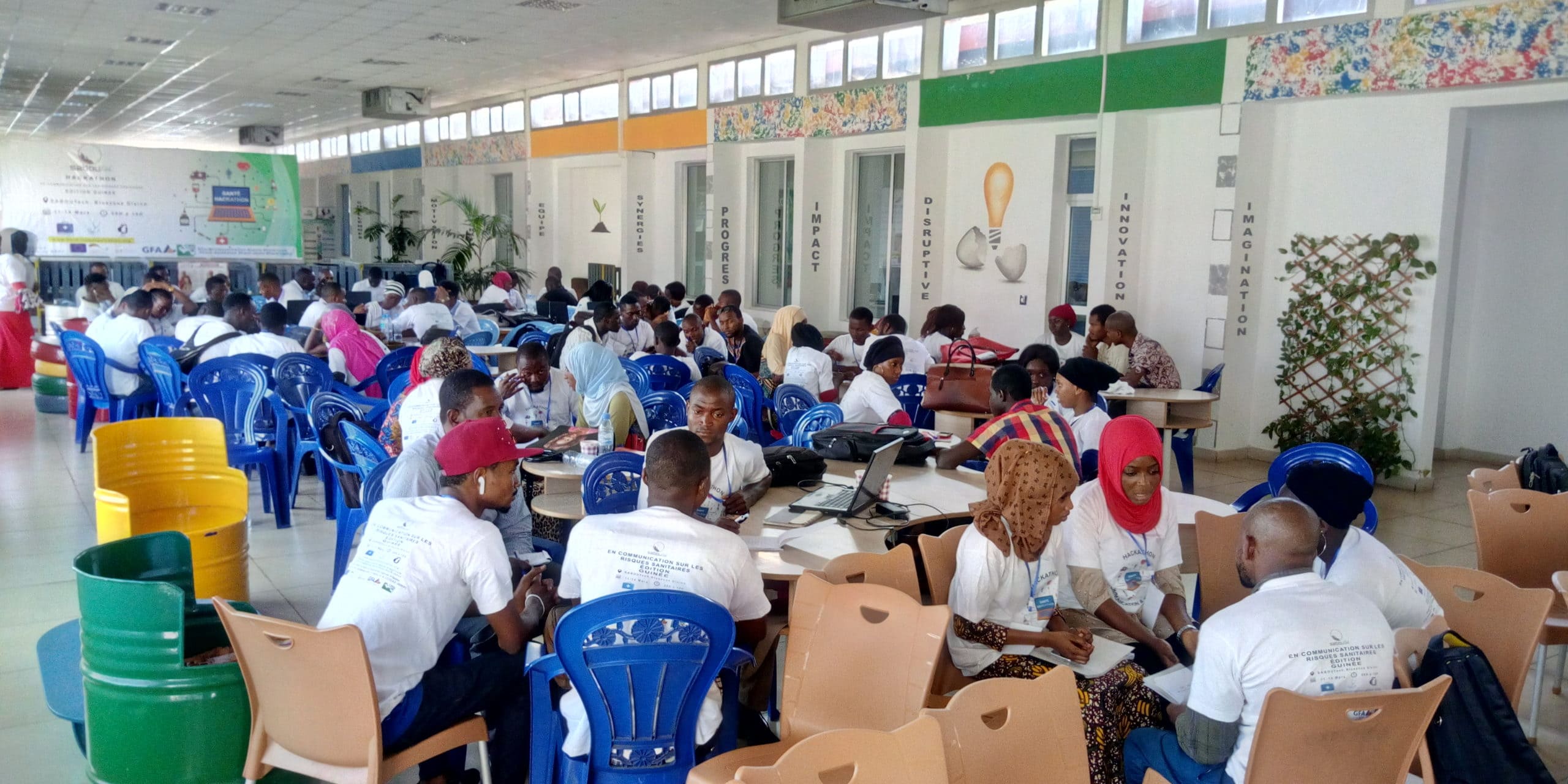 “The word ‘hack’ simply means creating a solution to something, while ‘marathon’ is all about covering a long distance in a short time,” explained Dr Nestor Inimgba, an anaesthetist from Nigeria who took part in a similar GIZ hackathon in 2018.

“So when it comes to hackathon – we are creating a big solution within a very short time.”

Between 2018 and 2019, the German Federal Ministry for Economic Cooperation and Development (BMZ) commissioned the Regional Programme Support to Pandemic Prevention in the ECOWAS Region (RPPP), implemented by, Deutsche Gesellschaft für Internationale Zusammenarbeit (GIZ), to hold four such hackathons in Guinea, Sierra Leone, Nigeria and Liberia. The event lasted three to four days, attracting dozens of students, IT engineers, software developers, medical doctors and entrepreneurs. Once they met, the participants grouped in small teams to tackle one overarching problem – how to provide swift and timely information on a major disease outbreak, and effectively disseminate information on how to stop it from spreading.

“The idea was to find innovative solutions for better risk communications,” explained Pilar Hernandez, team leader of GFA Consulting Group whom GIZ commissioned with the organisation and follow-up of the hackathons on risk communication.

“GIZ made us speak with people we never met before,” said Inimgba, adding that at first he was not sure if everything would work out due to the diverse backgrounds of people taking part. Yet this diversity, he said, turned out to be the key to coming up with something new.

Inimgba teamed up with local software developers, students and a businesswoman to develop Infodemics, a platform that quickly acquires, verifies and then disseminates information about new disease outbreaks and threats.

“Most of the existing solutions I found were for the people based in urban areas –but we tried to reach the last mile: those with no access to the internet, people who may not even a phone,” said Inimgba.

‘It takes a village’

In order to reach those people, the developers tapped into existing traditional networks in Nigeria.“Communities in Africa have religious, political, traditional leaders – we operate on a hierarchical principle, we listen to authority,” Inimgba explained.

“So we found a way of disseminating information to the local kings, pastors, imams, youth leaders. They don’t need to be on our platform, they don’t even need access to the internet – they just need to have access to a phone, which may cost less than $10 USD. By receiving SMS or voice messages, they obtain the correct information – and then they deliver it to the people, who trust them.”

Winners and their solutions

In Guinea, the winning team ‘Afrinov’ created the idea of an automated voice and SMS messaging system to facilitate information sharing and rapid community engagement in case of a disease outbreak. The system transmits information in real time.

In Sierra Leone, the winning team ‘Wellbodi Health Awareness System devised a system where official messages concerning diseases and outbreaks could be immediately translated into multiple local languages, and then streamed or downloaded for offline use. The system will also include educational graphics, a website and a chat room for the public to share information related to health issues.

In Liberia, Nyemah’s team created a fast-response website called ‘Mediktech Solution’. People can report disease outbreaks directly to the site, and obtain advice on how best to respond to it, providing details of first aid measures and also of local medical teams nearby.

“The website can be used across the West Africa region,” said Nyemah. “With our solution, you don’t have to send people to the field – millions can access the information directly from the telephones,” he added.

At the end of the hackathon, the winners in each country received a six months mentorship programme and € 5,000 for financing as prize money, as well as support to accessing relevant contacts to help them further promote their business idea. “The mentorship programme after the hackathons helped to connect the teams to relevant stakeholders in the public and private sector,” said team leader Hernandez.

From Protype to Practice

These connections led to other ripple effects:

In Sierra Leone, the winning ‘Wellbodi Health Awareness System team has been liaising with the Ministry of Health and Sanitation to learn about the public message approval process,  while also collecting sample public service announcements so the database contains recent and authentic content.

The team in Guinea “Afrinov” has received training on business modeling, prototyping, and user experience. The software development is being completed and the team have met regularly with the national health security agency ANSS (Agence Nationale de Sécurité Sanitaire) to discuss ways forwards.

Liberia’s MedikTech has been participating in weekly forums hosted by the Ministry of Health to discuss issues and needs and the team are busy planning fundraising strategies for further development.

In Nigeria, the team “Infodemics” obtained endorsements from the World Health Organization and Nigerian Centre for Disease Control officials. They also took part in the GIANT (Global Innovation And New Technology) Health Tech Event in London in 2019 where they won first place prize in  a competition for early stage innovators for their system, in the category of ‘Addressing Health Inequalities’. The team is now working on a pilot study to test their system, using the case of Lassa fever – a viral haemorrhagic illness posing a major challenge in the country – as an example to showcase to the local health authorities.

There is further scope for the teams to join forces. For example, Infodemics in Nigeria has been working on a global risk communication platform which could tap into existing networks in different countries while also serving as a content library – currently being developed by the team in Sierra Leone. The product could also make use of the SMS-communications gateway being developed in Guinea.

In the meantime, as disease outbreaks continue, the hackathon teams stand ready to meet future health challenges. “There’s a new outbreak of coronavirus, and there are already a lot of rumours going around,” noted Nyemah from Liberia. “We could help provide a solution to that.”