A Catalyst Dialogue on why this is so and what it means for policy and practice. 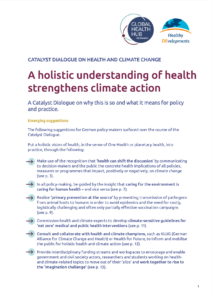 The following suggestions for German policy-makers surfaced over the course of the Catalyst Dialogue.

Put a holistic vision of health, in the sense of One Health or planetary health, into practice, through the following:

Why a Catalyst Dialogue on health and climate action?

Worldwide, human-induced climate change is increasing the frequency and severity of floods, droughts and fires, famine, neglected tropical diseases and outbreaks of zoonotic diseases[1]  that can explode into pandemics such as the one the world is currently facing caused by COVID-19. There is ample evidence that these processes are putting millions of lives at risk, while whole regions that are currently highly populated will soon become uninhabitable, and competition for vanishing resources sparks conflict and migration. It is too late for some of these trends to be fully reversed.

Humanity is over-stressing many of the Earth systems on which all human, animal and plant life depends. Climate scientists have identified nine planetary boundaries including land-system change, biosphere integrity and ocean acidification that, when overstepped, create a ‘tipping point’ of no return. Health emergencies of unprecedented proportions are on the horizon. In such a situation, one would expect that human and planetary health would move up on the political and social agenda and take priority over other, competing interests. But is this the case?

To inform the German government’s position on the linkages between health and climate action, the Global Health Hub Germany, in cooperation with Healthy DEvelopments, co-sponsored by the German Federal Ministries of Health and of Economic Cooperation and Development, convened a high-level ‘Catalyst Dialogue‘ among seven distinguished representatives of academia, development cooperation, foundations, civil society, youth and international organisations, including from the Global South. The participants gathered on July 12 and 13, 2022, for two virtual debates to discuss the overarching question ‘How can a holistic understanding of health guide a holistic response to the climate crisis?’ and in August and early September[2]contributed reflections in individual interviews.

The objective of this paper is not to present a consensual statement of all Dialogue participants, but to trace central lines of argument from the Catalyst Dialogue as it unfolded. It illustrates policy-relevant positions and presents a range of complementary perspectives, all of which promise to enrich Germany’s policy dialogue on health and climate action.

[1] Diseases transmitted from animals to humans.

[2] The dialogues and interviews happened 2-3 months before COP27. The publications mentioned by Dialogue participants reflect the state of their knowledge and reading at that time.