By by Annegret Spelleken, Ulrich Wagner, Ozzi Warwick and John Waters / Published by: Deutsche Gesellschaft für Internationale Zusammenarbeit (GIZ) GmbH and KfW Entwicklungsbank, March 2008 (this edition January 2011) / The publication was approved by the Federal Ministry for Economic Cooperation and Development (BMZ) and the KfW Entwicklungsbank 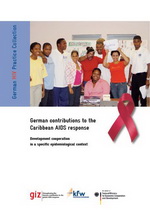 This publication looks at German-supported AIDS programmes in the Caribbean region. The first section describes initiatives supported by the German International Agency (GIZ) beginning in 1995 and aimed at HIV prevention among youth. The second describes an initiative funded by the German Development Bank (KfW) beginning in 2005 and taking a regional approach to social marketing of condoms and behaviour change communications.

The publication differs from other publications in this Collection in that it describes the context of such initiatives in considerable detail. This is so because the Caribbean is a region of extraordinary diversity and complexity with unique characteristics that call for unique responses; and because the Caribbean has a complex set of national and regional mechanisms for coordinating its responses to the AIDS epidemic.