Healthier mothers and babies through PMTCT

A decade of prevention of mother-to-child transmission 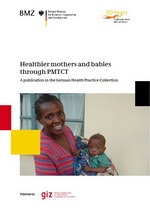 From the earliest stages of the HIV epidemic, limiting the vertical transmission of HIV from pregnant women to their infants has been a major focus of efforts to reduce the number of new HIV infections. Since the late 1990s, when clinical trials demonstrated the effectiveness of using antiretroviral drugs during and after birth to reduce the likelihood of infection among infants born to HIV-positive mothers, programmes aimed at the prevention of mother-to-child transmission (PMTCT) of HIV have been established and scaled up worldwide, particularly in countries with high HIV-prevalence rates. These programmes, which comprise a package of health and social service measures aimed at women and their families, are now available to more than half of the HIV-positive pregnant women in low- and middle-income countries and have succeeded in bringing about a 24% reduction in the number of children newly infected with HIV between 2001 and 2009. This report reviews the history and evolution of German support for PMTCT over the past decade, including an early and innovative PMTCT intervention it implemented in Kenya, Tanzania and Uganda between 2001 and 2009, and examples of HIV prevention, family planning, and HIV-related care and support activities which support all four prongs of a comprehensive approach to PMTCT.