Leave no one behind 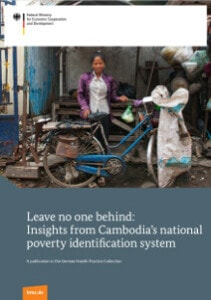 It is possible to have a poverty identification system that is national in scope, sufficiently accurate, accepted by communities and fully government-funded. The political and financial commitment of the national government, along with a cost-effective, community-based implementation, have allowed Cambodia’s Identification of Poor Households Programme, known as ‘IDPoor’, to scale up and become accepted as the country’s official targeting mechanism for programmes that support the poor.

IDPoor’s transparent, community-led process provides social value and keeps poverty on the political radar. An open, recurrent process like IDPoor brings communities together to talk about poverty, and helps to keep policy makers accountable for improving conditions for the poor and vulnerable.

To build trust in the data it generates, IDPoor needs to involve and be transparent with the stakeholders whom it expects to use the data. Strong monitoring and evaluation mechanisms, and a way to disseminate the findings, are just as important as collecting and providing quality data. Feedback fora or advisory groups can help to engage stakeholders and build confidence in the data so they are used for targeting.

Tension between speed and inclusivity is inherent in targeting mechanisms and needs to be balanced. The merits of ‘quick and digital’ should not necessarily be prioritised over the value of ‘inclusive and participatory’ – ideally, some combination of both should be used to maximise benefit and minimise error and cost according to government and community priorities.

Approximately one in five Cambodians lives in poverty. By certain measures of multidimensional poverty, up to 50% of the population are either poor or vulnerable to becoming poor. While market liberalisation in the late 1990s led to rapid economic expansion, not all Cambodians benefited, and newly implemented health service user fees were beyond the reach of many. Through government action and foreign support, numerous social protection programmes for the poor were set up, including free health care and school scholarships. However, each programme and implementing organisation had its own criteria and process to identify the poor. This was inefficient, confusing and often did not reach the most vulnerable populations.

The German government, through GIZ, has supported the Cambodian Ministry of Planning since 2005 to create and implement a new poverty identification mechanism that could serve as a single basis for targeting programmes for the poor. The result-ing programme, called ‘Identification of Poor Households’ or ‘IDPoor’, initially targeted rural areas – where 80% of Cambo dians live – and uses a hybrid model to combine the objectivity of a proxy means test survey with the accuracy and affordability of a community-based selection process. Government agencies and local or international organisations that provide programmes for the poor use IDPoor to target their beneficiaries, as they are now required by law to do.

Starting with a pilot in four communes in 2007, the IDPoor programme settled on a schedule of conducting its process in eight provinces per year, so that all 24 of Cambodia’s provinces are covered over a three-year period.

IDPoor faced a number of challenges and explored innovations to improve its performance. The Ministry of Planning improved implementation support and monitoring to make sure the process was correctly followed. Different definitions and perceptions of poverty raised questions at times about why IDPoor was not identifying some seemingly poor households, so greater out-reach and discussion with IDPoor data users and partners was needed. IDPoor also improved its information management and dissemination capacity by making the IDPoor database accessible online; adding visualisation and mapping features; and expanding interoperability and customised reporting. A pilot of some mobile technologies is also underway. The Ministry of Planning adapted IDPoor for urban settings and rolled out the first full urban round in 2017.

While the three-year cycle is impressive compared to poverty surveys in similar settings, households that miss the IDPoor round in their village must still wait until the next cycle to be evaluated for eligibility. With one in four Cambodians migrating for work, and with many households rapidly cycling in and out of poverty, IDPoor needs a broader way to allow households to apply for IDPoor in between rounds. An ‘On-Demand’ IDPoor mechanism is being piloted starting in late 2017. 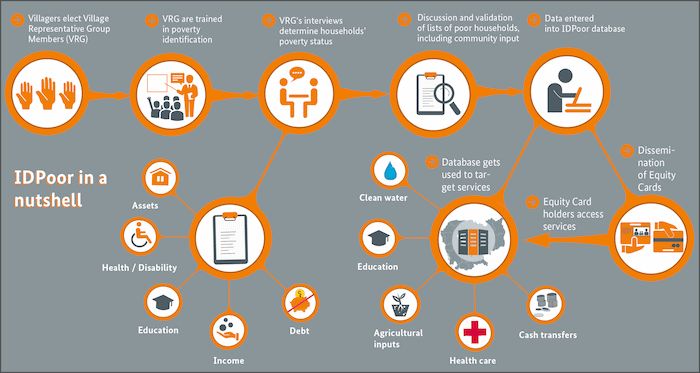