Over the past twenty-five years, Islamabad’s Health Services Academy grew from a small government in-service training centre into an autonomous academic institution renowned for its high-quality public health training. This case study looks at the way German Development Cooperation supported it on this journey. 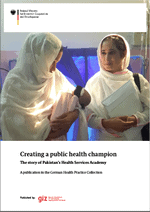 Situation. During the late 1980s and early 1990s, successive government strategies sought to decentralise Pakistan’s public health sector. However, progress was limited by a shortage of public health experts and a lack of in-country opportunities to gain more advanced expertise in this area.

Approach. In 1993, a joint Pakistani-German cooperation was launched to develop the existing national Health Services Academy into a fully-fledged public health school offering high-quality postgraduate public health training. Rather than simply focusing on faculty and course development, the collaboration also sought to improve the Academy’s capacity to operate effectively as an academic institution.

Results. The Health Services Academy has transformed from a small government in-service training centre into an autonomous academic institution that is renowned for its high-quality courses. There are many graduates now working in managerial positions and the Academy continues to champion public health and pioneer new areas of study.

Lessons learned. A long-term commitment is necessary to lay the foundations for a sustainable academic institution and to build a trusting relationship which can help overcome reform bottlenecks. Finding the right moment for technical advisors to step back and hand over responsibilities is critical for sustainable institutional development.

During the late 1980s and early 1990s, successive government strategies sought to decentralise Pakistan’s public health sector. However, progress was limited by a shortage of public health experts and a lack of in-country opportunities to gain more advanced training. A national Health Services Academy (HSA) was established in 1988 to serve as the main public-sector in-service training facility for public health and health management skills. Yet the Academy had neither the resources nor the expertise to provide the more advanced public health training that the country needed.

In 1993, a Pakistani-German collaboration was launched to develop the HSA into a fully-fledged public health school offering high-quality postgraduate public health training. Rather than simply focusing on faculty and course development, the programme, which was implemented by German Technical Cooperation on behalf of the Federal Ministry for Economic Cooperation and Development (BMZ), also sought to improve the Academy’s capacity to operate effectively as an academic institution. Overall this cooperation covered the periods 1993-2000 and 2004-2009.

During the first period, the joint Pakistani-German project team gradually built up the faculty and redeveloped the course catalogue. Existing staff members were sent abroad for postgraduate training and a new Master of Public Health course was created and accredited. The team also established an affiliation with Qaid-i-Azam University and worked together with the Ministry of Health to secure greater institutional independence for the Academy. By the end of 2000, the Academy was already well on the way to securing the academic and physical infrastructure necessary to function as a public health institute. Yet lack of progress towards achieving institutional autonomy eventually resulted in the suspension of the Pakistani-German cooperation.

However, local commitment to the Health Services Academy remained strong. Counterparts at the Ministry of Health continued to push for HSA to receive legal autonomy and, despite large staff losses, the Academy continued to teach its flagship Master in Public Health course. By the end of 2002 the political situation had improved and HSA had achieved independence from the Ministry of Health. Mindful of these positive changes, the Pakistani and German parties agreed to resume their cooperation. In this second period the project focused primarily on boosting academic standards and enabling the Academy to exercise its newfound autonomy.

In particular, financial management practices were strengthened to allow the Academy to generate income. A new salary system was created to enable the Academy to offer more competitive faculty employment conditions, and a performance review system was developed to link faculty pay more closely to performance. By the end of 2008 the Academy had established the preconditions to enable it to operate as an autonomous institution, yet it also continued to face a range of important challenges.

At this point, German Technical Cooperation decided to change the nature of its relationship with the Academy. Instead of offering further technical support, it invited the Academy to provide its expertise to support various German health sector initiatives in Pakistan, thus giving it the space to exercise its autonomy while providing concrete opportunities for it to build up its credentials as a research institution.

Over the past twenty-five years, Islamabad’s Health Services Academy has been transformed from a small government in-service training centre into an autonomous academic institution that is nationally renowned for its high-quality public health training. The Academy was the first public institution to offer a Master in Public Health and has continued to promote the public health perspective and pioneer new areas of study.

By the end of 2008, 188 students had completed the initial Master of Public Health, 30 had received the upgraded two-year Master of Science in Public Health and a further 42 were currently studying for the latter degree. A follow-up study suggests that many of the graduates from the one-year Masters programme have gone on to work in higher-level positions. Overall 79% of respondents reported experiencing some form of managerial-level improvement and these graduates were also more likely to be closely involved in policy development and to have a higher degree of budgetary responsibility.

Key lessons from the Pakistani-German collaboration to strengthen HSA include: