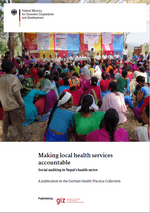 Situation. Public health facilities in Nepal face problems such as insufficient supplies of drugs and basic equipment, chronic understaffing and absenteeism, and poor infrastructure. A contributing factor is the lack of accountability to local people.

Approach. Social auditing has been introduced to increase citizens’ participation in decision making about local health facilities. A five-day process of investigation, analysis and reporting is run by independent facilitators, with special provisions to include women and disadvantaged castes or ethnic groups. Results are presented at a public mass meeting where community members participate in forming an action plan.

Results. 602 facilities in 45 of Nepal’s 75 districts held social audits in 2013-14. Social audits have promoted citizen participation, helped vacant positions to be filled through temporary contracts, improved the behaviour of health workers, and made facilities more responsive to patients’ needs.

Lessons learned. Among other requirements, successful audits need robust guidelines and good-quality independent facilitators to carry them out. On a system level, social audits can reinforce planning and quality management processes in other service areas, and help access increased funding for health facilities from local government structures.

During the past decade, Nepal has made measurable progress on a variety of health indicators. Nonetheless, at local level, public health facilities across the country face daunting problems, including insufficient supplies of drugs and lack of basic equipment, chronic understaffing and frequent staff absenteeism, poor provision of water and electricity, and low level of accountability to local people.

Social auditing has been introduced on an increasingly wide scale to increase citizens’ ability to participate in decision making about their health services at facility level. On behalf of BMZ, GIZ has provided technical advice and funding for social audits in the Nepalese health sector since 2009.

The basic social audit is a five-day process, in which a comprehensive schedule of investigation, analysis and reporting is followed to audit the performance of a given health facility. A shorter two-day process is used in subsequent years to monitor progress in achieving the action plan agreed in the initial audit.

Independent organizations – usually a nongovernmental organization (NGO) – are hired through an open tender to facilitate the process for chosen health facilities within a given district. To be eligible, an NGO needs to be based in the district; must have existed for at least three years; and must have at least five years of experience in relevant fields such as social mobilization, health system, women’s rights, etc. The tender is run by a Social Audit Committee at the district level, which is responsible for overall implementation within the district.

Once hired, the winning NGO works directly with individual Health Facility Management Committees, which are chaired by representatives of the Village Development Committee. Members include the health facility in-charge (director) and community representatives, including from marginalized ethnic groups and castes, and a Female Community Health Volunteer.

Social audits begin by examining the records that are kept by the facility. Voluntary ‘exit interviews’ are conducted with recently delivered mothers as they leave the facility. Female social auditors conduct the interviews in private, following a standardized questionnaire, taking between ten and 20 minutes. The social auditors also hold focus groups with local women and with representatives of disadvantaged ethnic or caste groups.

Results of the different information-gathering activities are presented at a public mass meeting where community members air concerns, ask questions of care providers and decision makers, and participate in forming an action plan. The auditor also prepares a final social audit report. The report and action plan provide a road map for the following year, identifying problems that need to be solved and ways to improve the quality of services. While the most immediate user of the results is the health facility itself, recommendations are also made to local and district levels of government.

In 2013-14, a total of 602 facilities in 45 districts (i.e. the majority of the country’s 75 districts) held social audits. At present, GIZ provides technical assistance in six districts, while other external development partners including UN system agencies, international NGOs, and bilateral agencies provide additional support. The targets set by the Ministry of Health for 30% of health facilities to have social audits by 2015 is on course to be met or surpassed a year early.

Among other advances, social audits have promoted citizen participation, social inclusion and mutual accountability. They have also helped vacant positions to be filled through temporary contracts, improved the behaviour of health workers, made facilities more responsive to patients’ needs, and helped to reform or re-energize health facility management committees.

A recent review in the Far-Western Development Region allowed the results to be tracked over three years in two health facilities. Among other findings, social audits increased demand for services by informing people of (a) what is available and (b) what they are entitled to in their local area. In both facilities, staffing shortages identified by the social audits were fully or partially filled. The recurring challenge of drug stockouts and infrastructure problems with buildings and equipment were effectively dealt with through the audit process. On a broader scale, beyond these two facilities, the social audit tool has added value in ways that were not originally envisaged, such as giving facility in-charges opportunities not just to respond to questions and concerns, but educate local community members.

Social auditing in health facilities has now been carried out for five years, though the process has been one of fairly constant change over this period. A number of important lessons have been learned during that time. Robust, experience-based guidelines are indispensable to guide successful audits. The quality of independent social auditors must be ensured, particularly by setting minimum qualifications as hiring criteria and monitoring their performance in different parts of the audit. Local health staff must be well oriented prior to a social audit in order that they will assist rather than resist the process. Social audits can reinforce other planning and quality management processes such as quality improvement in other service areas. Finally, better integration with other efforts to increase health service quality can help to access increased funding for health facilities, notably from local government structures such as Village Development Committees.